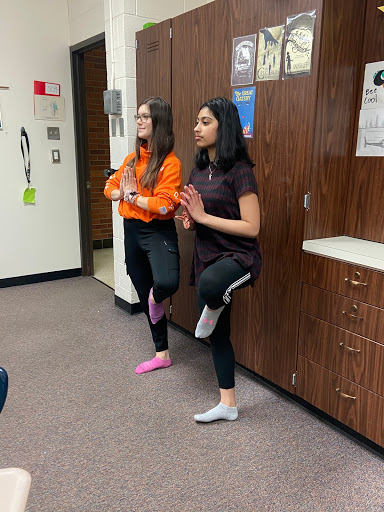 The DHS Yoga Club, founded by Jashvi Desai and Sonya Hansen at the beginning of the school year, meets the first and third week every month after seventh hour in room 304, Ms. Nelson’s room. During the meetings, the club members follow along to a 10 minute long yoga video from YouTube.

“We just decided it would be a really nice way to get other people to [do yoga], because we really liked doing it when we were talking about it,” Hansen said. “And we were like, ‘hey, we could, we could start a club like that at dow,’ more people could do yoga together and we just thought it would be fun.”

According to Lexico, yoga is “a Hindu spiritual and ascetic discipline, a part of which, including breath control, simple meditation, and the adoption of specific bodily postures, is widely practiced for health and relaxation.” Yoga Club focuses on many different aspects of yoga.

To find out more about Yoga Club, contact Jashvi Desai or Sonya Hansen.