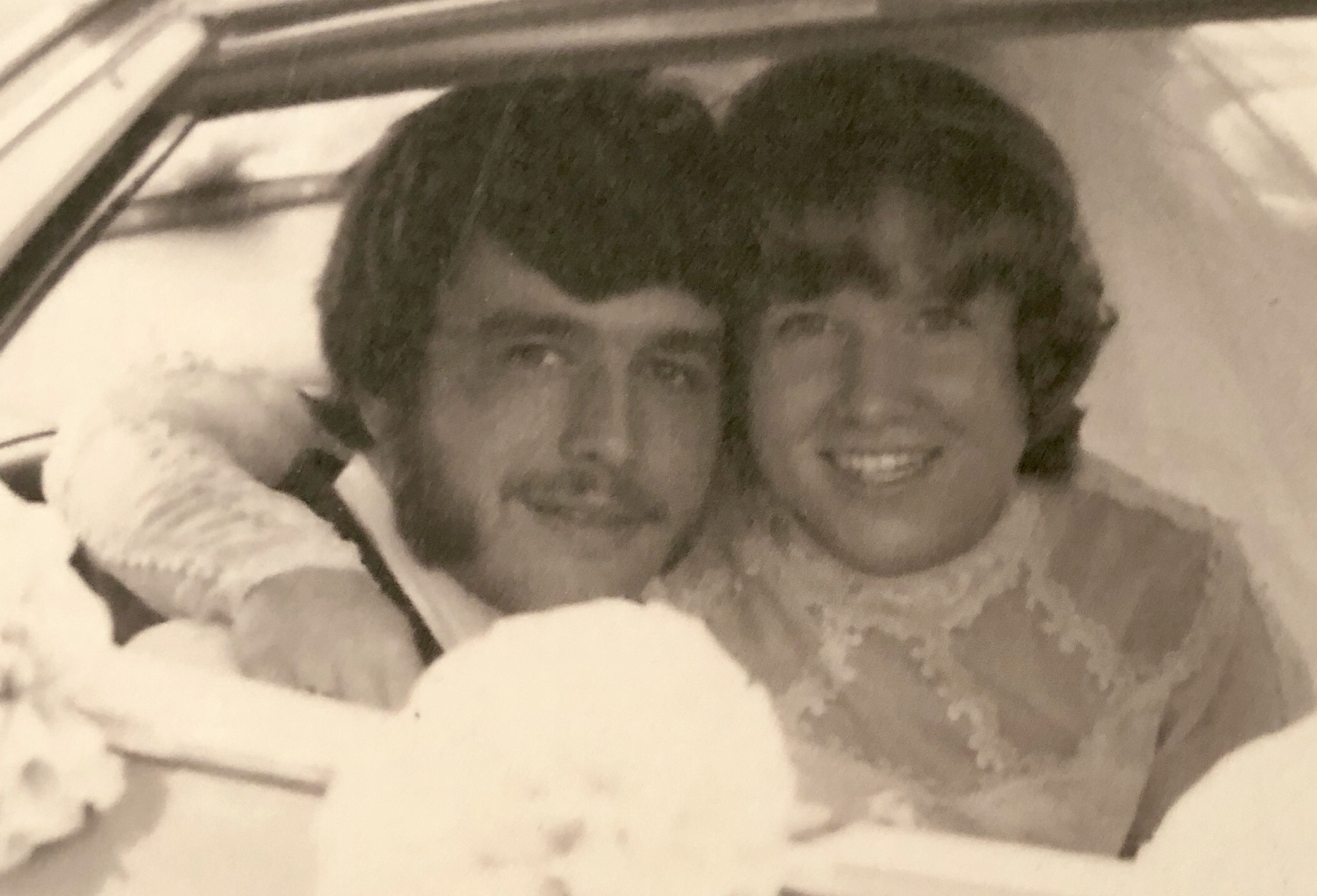 Couple married 46 years met at a wedding under abnormal circumstances

A wedding can be the perfect place to meet someone; a love trap, if you will. The girls feel the love in the air. They get dizzy and giddy from dancing all night long, and the magic gushing from a simple ceremony and reception is enough to make any girl drunk on happiness and feel alive with possibility. Weddings are a fantasy land where anything is possible. Men know that. Men thrive on possibility. Take it from Bill and Cindy Lutz. They met at a wedding reception in Pigeon, Michigan they both happened to be crashing.

“Back then,” Cindy said. “If you knew there was a wedding and if your friend knew the bride or groom, you went to have fun, even if you did not know who the bride and groom were.”

It was 1971. The Pigeon VFW Hall was packed with people who were actually invited to the wedding. Their eyes met from across the room. He made the move, walking over to her, asking politely to dance. They whirled around the dance floor to songs they can’t remember for what seemed like minutes, but an hour passed before they stopped.

“We sat down and started talking, and I asked her on a date,” Bill said.

On their first date, Bill picked Cindy up in his purple Plymouth Satellite Sebring Plus, which he had lovingly nicknamed “The Purple People Eater,” named after the goofy 1950’s song. They were on their way to see a movie they can’t remember now, probably something like “A Clockwork Orange” or “Dirty Harry”, but were pulled over by a tall, stringbean-esque Bad Axe police officer.

“The police got a report of a stolen car that was similar to my car,” Bill said. “I mean, how many people in the thumb of Michigan have a purple car? I showed him my registration and that the car was mine and we went on our way. It was definitely a memorable first date.”

This was the beginning of a two year whirlwind adventure. They went for long drives through Michigan, watched countless movies ranging from romance to action films, had picnics in fields, and took walks together. As their romance grew, so did their commitment. They took a walk through downtown Bay City one afternoon and stopped at Herman Hiss & Co., where the window was filled with sparkling diamond rings and glittering gemstone necklaces. Cindy remembers that she only wanted to go in to show Bill what she liked, though he remembers the trip differently.

“I didn’t propose to her,” Bill insisted. “We went into Herman Hiss & Co. one day to look around and the next thing I know I’m buying a diamond. The next day I was asking her dad for permission, praying that he would say yes, though it was a little too late for that.”

After a couple years of going out, the 20-year olds were ready to get hitched. The wedding day had finally come: May 19, 1973. Friends and family flocked to a small church in Sebewaing, Michigan, all wearing their Sunday best. Cindy was preparing for the ceremony in a back room of the church. On the morning of the big day, however, the bride faced a small bump in the road.

“I hated how my hair turned out that day,” Cindy said. “I had been practicing it all week and it turned out nice every day except the actual wedding day. I didn’t do a fancy up-do, I just left it down but it was puffy in one spot and flat in another.”

Being a proud farmer, Bill knew that even though he was getting married that day, there was still work to be done before the knot could be tied.

“I got up at four to milk the cows and planted a field of corn in the morning, then I put on my tux and went to get married,” Bill said.

To prevent friends and family from tying tin cans to the bumper and slathering ‘Just Married’ across the back window of his precious Purple People Eater, Bill stashed it in a barn near the church. Little did he know the car would be found and duly decorated, whether he liked it or not. It was found by a flock of nesting pigeons.

“They pooped all over the car,” Cindy said. “His purple car had white polka dots all over it. He was really embarrassed to drive it from the church and through town.”

After the simple ceremony, Cindy worked the reception like nobody’s business. She was visiting and talking so much that she didn’t have time to eat. Talk about a ‘Chatty Cathy.’ On the way to their honeymoon in Gatlinburg, Tennessee, Bill pulled in to the new drive-in hamburger joint in town. It was called “McDonalds.”

“He stopped to get me some fries and an orange pop,” Cindy said. “I was so hungry.”

Today, with 46 years of marriage, four children, and nine grandchildren under their belts, the Lutz’s have a large family that will only keep growing.

“I don’t think we’ve ever had a big blow out, screaming, hollering fight,” Bill said. “We understood where each other was coming from. If we had a disagreement, I’d jump in my truck and go to the farm and she’d do her own thing. I still love her a lot I guess. I’m a joker and she’s more of a straight line, and I guess that works. It hasn’t always been a fairy tale, but we did what needed to be done and we did it together.”

Even through good times and bad, Bill and Cindy wouldn’t trade their story for anything. Bill looks back fondly on the night they met fondly. He never imagined his life would change so drastically that night.

“Who knew, right? I crashed a wedding for the free beer and now I have everything I’ve ever wanted.”