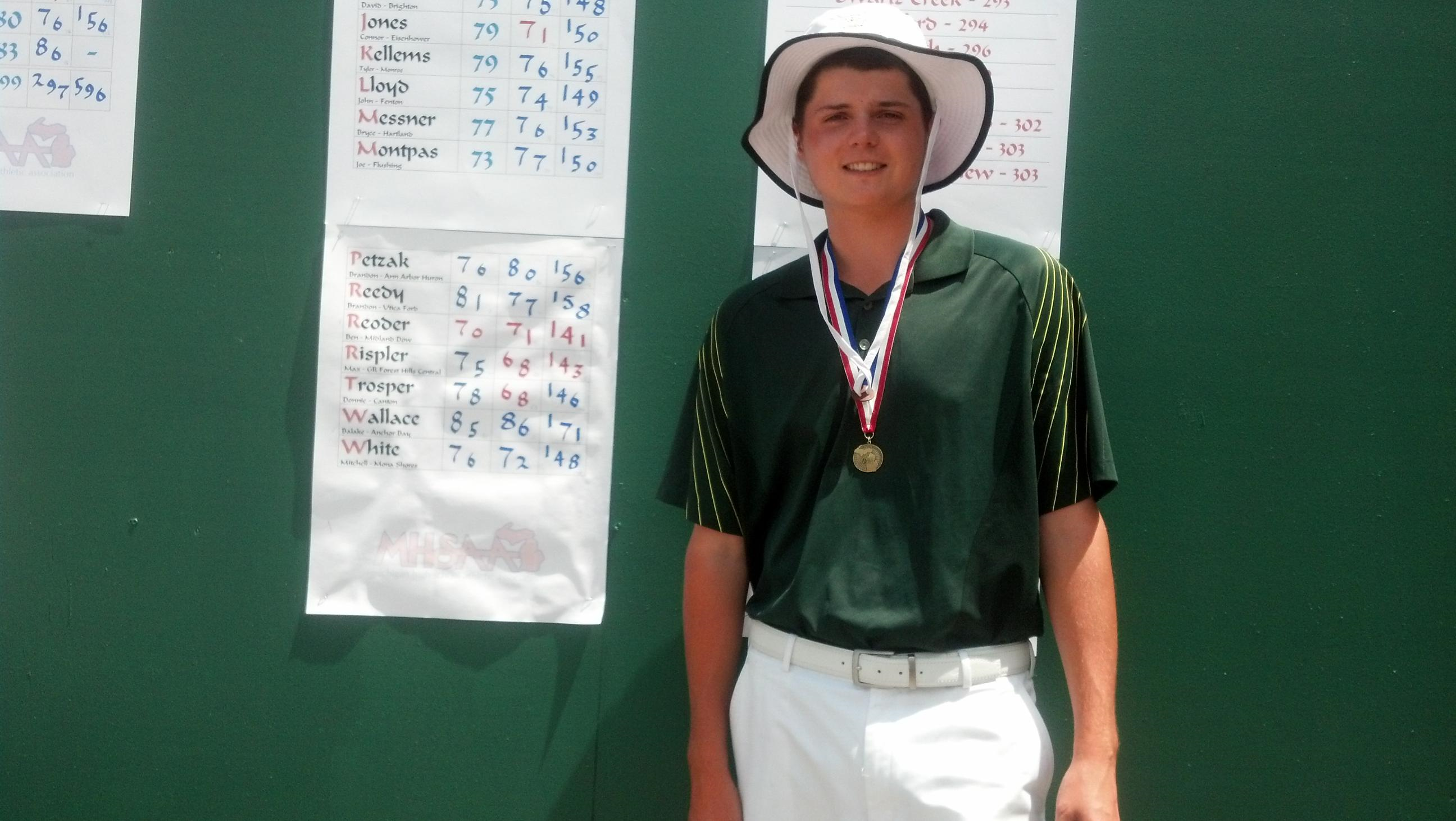 The atmosphere felt much different this past weekend down at Forest Akers East Golf Course in East Lansing, Mich. My entire golf career has seemed to be a compiled experience that has the same result. I’ve always trailed far behind these elite junior golfers and ever since I was young I’ve always wanted to know what it took to be one of the best. Well this past weekend at the Division I state championship I was in the driver’s seat and it’s a feeling that I think I can get used to.

Golf coach Mark Pickering drove me down the Thursday before the tournament. I had already played the course before, but it’s always nice to relax and see the track of land and try to get some sort of comfort level. Finishing up the practice round with a two over par 74, I was pleased and ready to go relax in the hotel room.  I had been swinging the club well all season and had taken medalist at two different conference matches. Needless to say, my mind was in a good place. I was ready to play golf and I was ready to prove to my peers that I had earned my spot at the top.

When I say that my mind was in a good place, I think that the right mindset in itself was one of the reasons that I played well. My whole life I have gone into a round of golf being afraid of shooting a bad round. I have always been afraid of that embarrassing round that will have me in a bad mood for weeks. But as of recently in my golf career (the past season or two) I have had a mindset that has elevated me to be one of the better players in the state. I no longer doubt myself and pray that I won’t have a bad round. I now find myself being excited or “pumped up” to go out and shoot a great round. The switching of being scared to being ambitious on the golf course has taken me to the next level. They say golf is all mental and I’ve learned that it is no myth; you have to be solid in between the ears if you want to be successful on the course.

On the first day of the tournament there was so much nervousness in the air. You had Andrew Walker, the youngest player in history to qualify for the U.S. Amateur (younger than when Tiger Woods qualified), and you had Donny Trosper, a dominant junior golfer who has been winning in Michigan since he was just a little kid. Every last player who was there knew of the talent and there was so much anxiousness to go out and play.

My routine for both days wasn’t any different, I would go out and warm up on the range to get into my rhythm, and I would putt and chip before heading out onto the course. The first day was sort of a roller coaster of events. A few early bogeys and a lot of missed fairways had me grinding like I had never grinded before. With the help of my competitive mindset, and the support of Coach Pickering, I felt like a little adversity couldn’t have slowed me down. Finishing out the day with a chip in and some great par saves, I came into the clubhouse with a two under par 70. Exhausted and ready to go rest I watched the rest of the scores come in. I trailed by two with a 68 and a 69 on the leaderboard. I was excited because I have watched too much golf on television to think that I was out of it being only two strokes back. I knew that one more good day would put me at the top of the leaderboard.

The second day of the tournament seemed relatively routine. With not many bad shots on the day, I came in with a one under par 71. It was a solid round of golf but I knew it was going to be close and I really had no idea at all what was in store for me. The leaderboard was crowded with what seemed like all 95 competitors and their whole families. People pushing and shoving to see if they could see the scores being posted. I had heard rumors that the kids who lead the tournament after the first day had played well, so I had the mindset that it was the end of the road for me. Then directly on cue I see Coach Pickering striding across the crowd with a look of much emotion on his face. I couldn’t tell if it was a smile or a look of great fear, but I had a feeling of what he was going to tell me. I was in a five man playoff for medalist honors and I had 15 minutes to warm up and get ready.

I rolled a few putts just to stay focused and tried not to worry about the crowd. Now normally I’m used to the usual aunt, uncle, grandpa, mom and dad following me, but that playoff was a tad different. Approximately 250 completely unfamiliar faces surrounded the first hole as we got ready for this five man showdown for the first place honors. I was the last to tee off but I was one of the only kids to hit the fairway on the first playoff hole. After the opening drive I had an 88 yard approach shot which I safely put to 15 feet. Only one other kid in the playoff hit the green. After a series of chips and mediocre putts one kid bogeyed, and the rest of us pared. Four of us advancing to the next hole. I was the only one to hit the fairway on the second playoff hole and ended up making a pretty easy par. One other player had pared but the other two bogeyed and were going home as well. So on the last hole it was me and one other kid, being watched by 250 people as we battled for first place.

My opponents drive was hooked very far left, and mine had gone left but nestled itself in the rough. I had to hit a hooked gap wedge around a tree and the other competitor had no shot at all. I hit my 120 yard gap wedge out of the rough and around the tree to 10 feet and he advanced his low punch shot to the left hand rough. As I tapped in for par and he failed to get up and down, I had won. I outlasted my competitors with three pars and I was the division one state champion. Every last bit of anxiety and pressure I had felt over the past two days was just let out. As I embraced Coach Pickering and my family, it was the best feeling in the world. In one moment all of my hard work had paid off.

After everything that has happened I feel like I have emerged as a new person. I now know that I have the ability to beat some of the better competition out there and I will have the confidence I need in future pressure situations. The feeling of making my family so proud will stick in my mind forever and I hope this is only the beginning to a long and satisfying career in the sport that I love with all of my heart.