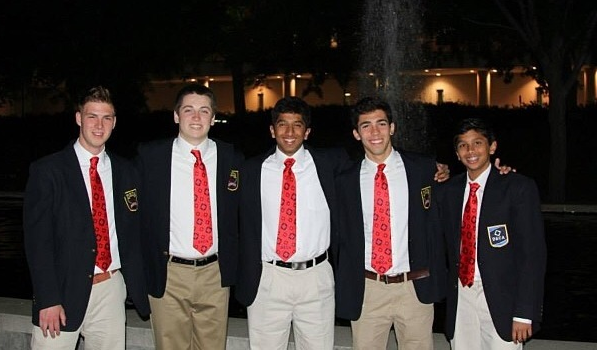 As DHS DECA adviser Melissa DeBoer likes to tell her students before competition, “Go get ‘em tigers”, the group of students that went to this year’s International Career Development Conference (ICDC) did just that.
The group consisting of seniors Felipe Haddad, Trevor Hulbert, Nicholas Smith, Vikram Shanker and freshman Varun Shanker made impressive strides representing Michigan DECA as some of the top 10 percent of marketing students in the world.

The conference, which took place at the Georgia World Congress Center in Atlanta, GA, from May 3-7, had over 16,000 students from all over the world come to compete for the chance to prove themselves as the best in the world for their event. DECA’s international executive office elections for 2015 also took place during the conference.

It all started out on May 3 with a 5K fundraiser for the MDA in which Vikram had the fastest time of the DHS group of 22:53 on the grueling course covering Atlanta’s landscape. The DHS chapter then spent the rest of the day at Six Flags with other DECA students. Starting Sunday morning, competition began with a cluster test. These cluster tests challenge the students’ knowledge in their event and count towards their final score and serve as a tiebreaker.

On May 5, the students had their preliminary role play case studies. This busy day also included sponsor booths advertising their involvement in DECA, along with business ideas and career opportunities.

On May 6, DECA held its first awards session in the Georgia Dome letting students know who would be moving on to the final rounds of competition. Hulbert was awarded with a medal for placing top 10 in the world for one of his case studies on Monday but unfortunately wasn’t a finalist in his event Food and Restaurant Management. Smith and Vikram were top 20 in their event, Travel and Tourism Team Decision Making, and moved on to the final round of competition along with Varun who also got a medal for his test and one of his case studies in Principles of Hospitality and Tourism.
DECA concluded its 68th annual ICDC with the grand awards session on Tuesday night. The team of Smith and Vikram were top 10 in the world for TTDM and Varun placed third in the world for PHT.

“I was really surprised when they called my name on stage,” Varun said. “It felt really good to know that I was one of the best in the world for Principles of Hospitality and Tourism.”

Students wrapped up their DECA year with a banquet hosted by the chapter’s officer team. The keynote speaker was DHS DECA alumni and Midland Precinct candidate for Ward 3 Precinct 4, Billy Schuette.

“DECA has been one of the best experiences in my freshman year,” Varun said. “I’ve learned so much from my participation [in DECA] and I have met so many people I never would’ve had the opportunity to meet without DECA.”

DECA is encouraging all students with a serious interest in business and marketing to join DECA in the 2014-2015 school year.