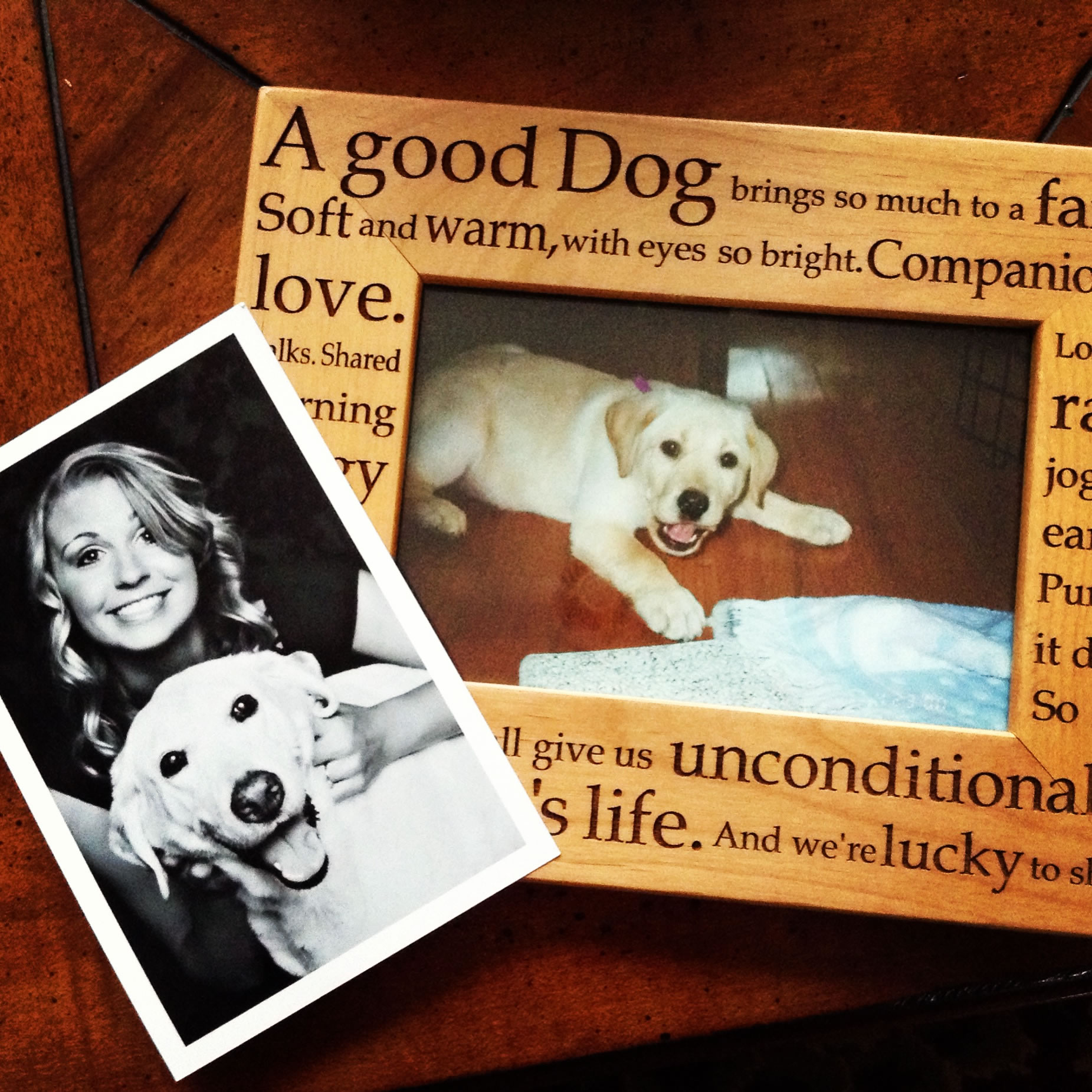 I think everyone who has had a dog can remember when they first met them. They were an instant best friend, a walking stuffed animal and an immediate loving and loved member of the family. I’m sure you can recall how exciting it was to decide on the perfect pet name and how hard it was to pick the name, then all the sudden, it would just fit so perfectly for your pet when it came to mind. It may not be easy to remember the first time you had to pick up their unexpected “doo-doo,” but you know there was a lot of it to unpleasantly pick up.

It’s nice to look back at the times going to the lake with your furry companion, giving them baths after they rolled in a bunch of mud, playing tug-o-war, or taking those long heartfelt walks in the mid-summer at sunset. They always kept your secrets, and they always gave you love. Even though the hardships and good times of raising your dog seem much of a blur when looking back at the memories, you still remember them being there for you throughout your life. Sometimes though, you never realized how significant this furry member of the family was, and once they’re gone, you’ll understand what true role they had in your family.

If your dog is dying, only certain people understand your pain. Not everyone has experienced the loss of a pet and they will not understand the pain you’re feeling. Sometimes, if you try to open up to the people who haven’t been through your situation, they will not want to pity you, or they’ll just pretend to care, and that’s the honest truth.

When you do put your dog down when it’s time to, it’ll be hard to decide if you’d want to watch them be put asleep or to just stand outside the examination door. I was there for my dog because I personally believe it’s best to be there for your dog and be by their side through this rough process for they were there for a part of your life and remained always loyal.

Penny, my Labrador retriever, had been diagnosed with liposarcoma (growing tumors) two times in her life. She has always been a strong pup and fought through the agonies of cancer successfully. After four years of no symptoms of cancer, Penny only had developed signs of arthritis and old age. Around November 2012, my mother took Penny in for her annual checkup and shots. As Dr. Johnson, the vet, reviewed her x-rays of her torso, she noticed one unfortunate abnormality on her spline. There was a mass in her stomach area, and it was bleeding. Dr. Johnson couldn’t tell my mother how severe the bleeding was, but could tell her it was cancer and advised my mom to take her home and watch Penny carefully.

We didn’t expect much of it, the bleeding that is. We assumed that Penny had until her 13th birthday, or maybe will make it to the summer. The hopes we had for Penny were torn apart three days later. At this time it was about two and a half weeks before Christmas. Penny was acting like her normal self, but became extremely bloated. It almost looked like she was expecting a litter. She would eat and drink and wag her tail, so we believed she still was fine and wasn’t in pain but we knew that death was more imminent than we had though. She was sensitive around her stomach area and would breathe heavily from time to time. My mother was thinking that maybe Penny was just faking the wagging and feeling well just to make us happy. For a stomach that bloated with heavy breathing was a sign for pain and that this week was the week to put her down, and it was time to prepare for her death.

My mother called the vet, and told their office staff what was happening to Penny and they said they would notify Dr. Johnson. In the meantime, we fed Penny chicken broth as well as rice, and any chance my mother and sister had, we would crawl up to Penny’s bed, tell her all the things we loved about her, and just cry. We didn’t tell my older sister, Lexi, what was going on with Penny at first since she was taking exams for college, but eventually we did and she ended up coming home hoping to be there the last day Penny lived. My father was never around to really say his goodbyes, he never really showed affection to Penny, but we always caught him giving her carrots or petting her in secret. Surprisingly, we got a phone call with very interesting news. Dr. Johnson was willing to give us surgical medicine that’s used to stop bleeding. We agreed to give the medicine to Penny, and treated her immediately.

Christmas was approaching and the Holiday Spirit was present. Penny was doing well with the medicine and my family was just overjoyed and praying that we would get to spend Christmas with our dog when she was supposed to die weeks ago. As my parents were going in and out of a house, a dark butterfly flew into our home through the garage door and was flapping everywhere. Just for fun, we decided to keep the butterfly and named it Butter. Butter was Penny’s “friend”; at least that’s what my mom said.  Christmas Eve though, we noticed Penny was having trouble walking but we thought not much of it and just gave her a higher dosage of her arthritis medicine. My family and I went about our day. My parents stayed at home cooking dinner while I did last minute Christmas shopping and found a brand new blanket for Penny. It was the same color as her fur. It was so soft and perfect; I knew she’d love to snuggle in it. I brought it home and gave her the blanket as an early Christmas present then I proceeded to my room to get ready for church along with the rest of my family.  Right before we were about to leave for church, my older sister started screaming for help and started crying.

My family and I ran out to see drops of blood all over the brand new blanket I bought for Penny. My father, who is a doctor, carefully examined Penny and opened her mouth to see if she was coughing up blood.

False alarm. Penny just had bleeding gums because she had been eating too much mushy food. We put her new blood stained blanket in the wash and headed off to church as well as enjoyed the rest of our holiday evening.

Christmas day I woke up early, and the rest of the family, like every year, ran downstairs to open presents. Penny was sitting on her bed, happy as a clam, a little bloated but fine. I asked her if she wanted to go outside but she wouldn’t move or get up and I just assumed she was being lazy or she was stiff. So I dragged her bed towards the Christmas tree so she could watch us and help open presents because that’s what she always liked to do with us on Christmas. I ended up giving her blanket back.

Throughout the day she wouldn’t get up, so my mother, concerned, tried to force her up and she would just fall over. She could barely use the bathroom, she soiled herself, and her stomach just continually grew bigger from the bleeding and the stomach fluids. She was still very alert though, still would eat, and the butterfly around our house would keep distracting her. But she looked into all of our eyes with sorrow message that said, “I’m done, I’m giving up, it’s time.” My mother didn’t want to take her to the emergency vet in a nearby town because it’s an unfamiliar environment to Penny and she didn’t want her to die like that. The rest of Christmas we fed Penny broth snow cones, said our second goodbyes. Christmas night, my mother and my sisters crowded around her bed and tried to calm Penny down. She was fidgety and breathing even harder than before. We just stroked her, told her it was going to be okay and we all napped by her for a bit crying.  My mother, my little sister and I went to bed eventually but Lexi stayed by her the whole night. My father woke her up and told her to go to bed. My sister listened and followed upstairs but crept around the corner but noticed my dad saying his loving goodbye to Penny.

9:45 a.m. my mother, my sisters, and I took Penny to her final destination. We carried her to the car and drove to the vet.  We had a Bible that had a list of saints that took care of certain things, people, etc. As I read a prayer in the car for St. Francis to look over Penny and keep her well, Penny miraculously stood up in the car for a near minute when she couldn’t walk at all. She then, though sadly, fell down again. Yet, from seeing this, my sadness soon turned to relief. I knew Penny was being watched over  by good presence.

At the vet, the worst part wasn’t really the worst part. Putting down your dog is actually very deceiving. Dr. Johnson’s work associate sedated Penny, which put her in a state of peace. The rest was pretty easy. A few weeks passed from Penny’s death, and I missed her a lot. Butter the butterfly still lives in our house. Curious, I looked up the butterfly’s name online. It’s name was the Mourning Cloak Butterfly. How ironic. The spirit of nature and God definitely proved that Penny, and like other dogs, are in a safe place. The loss of the pet may be tragic, but just like any other loss of a loved one, understand that where their spirit lies, is in a place of love and peace.