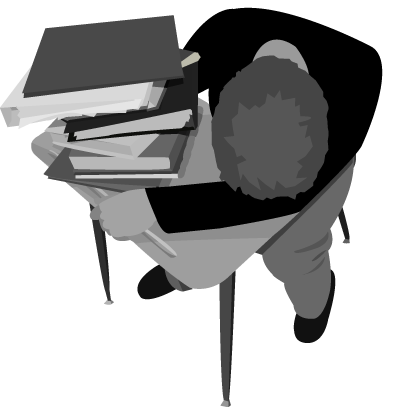 Senior year is less important academically than other years in high school. Graphic by Jenny Hearns

Senioritis. According to Urban Dictionary, senioritis is defined as a crippling disease that strikes high school seniors. Symptoms include: laziness and an over-excessive wearing of track pants, old athletic shirts, sweatpants, athletic shorts and sweatshirts. Also, this disease features a lack of studying, repeated absences and a generally dismissive attitude.

This common epidemic has affected many of the second semester DHS seniors as well as some underclassmen. Senior, Taylor Waltz has claimed that she has senioritis due to her acceptance to the colleges she has applied to. As a result of her being eager to finish high school, Waltz has decided to take classes that require less work.

“I took a lot of easy classes this year and already dropped A.P. Biology,” Waltz said.

Although Waltz has declared herself to exhibiting senioritis and lacking reasons to try harder than she has to this year, she has not experienced a negative difference in her grades leaving her reassured that her GPA will remain the same.

Another senior, Steele Lacey has stated that he has surrendered to senioritis also. Unlike Waltz, Lacey’s reasoning for falling into this mindset is focused on him putting his energy into something other than basic academics.

“Mentally I’ve checked out, I’m not lazy I just have better things to do,” Lacey said. “I basically stopped doing math and science and spend all my time on art.”

Lacey feels that is it more beneficial for him to invest himself into his art classes considering that his future plans are to find a career in that field.

In favor of senioritis, DHS history teacher Brent Chambers is excited for all seniors who are glad to be starting a new chapter of their lives and believes that senioritis is something that doesn’t need to be avoided.

“I love the enthusiasm of young people, they really can’t be judged because I was the exact same way when I was a kid,” Chambers said. “When you drive a Chevy for 10 years and you’re about to trade it in for a Saab, you aren’t going to be thinking about your Chevy anymore.”

Even though it’s called senioritis, there are a number of underclassmen influenced by this mentality as well. Junior Ryan Johnson views senioritis as a positive thing and is looking forward to submerging himself into this mindset next year.

“I think it’s wonderful, there’s nothing wrong with it,” Johnson said. “It’s enjoying life like it’s meant to be enjoyed.”

Another Junior who is feeling early effects of senioritis is Matt Bloom. He sees this as something that could potentially affect him in a negative way.

“I think everyone feels an effect of senioritis but it comes into full play when you’re a senior,” Bloom said. “I mean, I already procrastinate so I am probably screwed for next year. If my procrastination gets any worse, I seriously won’t want to do anything.”

In agreement with Johnson, sophomore Amanda Greene also sees no drawbacks in students having senioritis.

“I think senioritis is completely acceptable,” Greene said. “Why can’t a senior just relax and enjoy the rest of their year if they’ve worked hard for three and a half years?”

With colleges and universities presetting their requirements for applying freshmen, students will know how hard they need to work and realize the goals they need to set for themselves academically. This is an advantage to most students who understand what field they want to major in, where they’d like to earn their degree and which career is right for them.

“If you don’t want to go to a college like Michigan, you can just coast and still meet requirements,” Johnson said.

Contrary to the thoughts of many seniors considering senioritis, not all underclassmen think senioritis is appropriate. Sophomore Rachel Marble thinks that all students, even second semester seniors, should try their very best all the time.

“I don’t think that slacking off [academically] just because the end is approaching is a smart move, that’s just plain dumb,” Marble said. “Finish strong Class of 2011!”

Whether senioritis is viewed as a damaging disease or a calming relief, graduation seems to be the only cure.