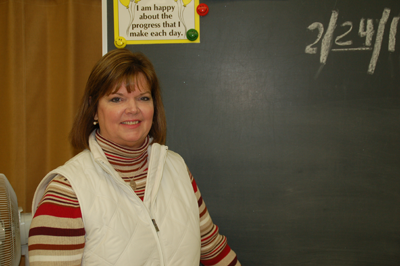 By Lindsey Lee & Kelly Wilson
out of bounds & business manager

Every year, the Gerstacker award is given to four teachers in the Midland Public Schools district. There are two teachers from the high schools and middle schools and two from the elementary schools. This award represents the hard work and dedication of a teacher in their respective buildings.

Special Education teacher Cathy Hawkins-LaGoe has been involved in the selection process for the past six years. She said that each letter sent in to nominate a teacher is very unique. She stressed that it’s not the number of nominations sent in, it’s the quality of the nominations that are considered.

“It is really heartwarming, some of the stories that you read in the letters,” Hawkins-LaGoe said.

Hawkins-LaGoe encourages students in all buildings to take the time to vote for a teacher that has impacted them. The winner of the award receives a monetary award and a vase with their name on it, but Hawkins-LaGoe said it is not just the awards that impact the teachers, it is the nomination itself that affects the winner.

Chambers was especially impacted by the various letters written for him to win the award. He said that he benefited from being able to read the letters after winning the award.

“It was a pretty emotional experience reading the letters that nominated me,” Chambers said. “Some of them were written by students that I haven’t seen for years and to think that they felt enough about me to come back from wherever they were and write these letters, it was a pretty powerful experience.”

Winning that award for Chambers was an exhilarating experience.

“One, it validated that this unbelievably challenging job was recognized as such,” Chambers said. “And two, it encouraged me to stick with it. I did 14 years of alternative ed.”

When Chambers won the award in 2008, he was teaching at the Franklin Center in Midland as a social studies, gym and English teacher.

“The stress of the job that I was working at got unmanageable years before,” Chambers said. “But somehow I kept on doing it because I liked the kids and I liked what I was doing.”

Math teacher Jason Watkins agreed that winning the award has a significant impact on his life.

“When you win an award among your peers, it’s humbling,” Watkins said. “It’s pretty awesome to be recognized like that by teachers, students and peers.”

The nominees of the award are not aware that they are being nominated. Chambers had not the slightest clue that he was put up for nomination for this award.

“I thought I was being evaluated to see how the alternative ed. program was working,” Chambers said. “They evaluated me so much, that it didn’t occur to me that something else was up.”

People come in to watch him teach, so it was just a regular occurrence.

“It was a huge moment [to win the award] because it wasn’t a very visible program,” Chambers said. “It was very professionally intimidating that somebody noticed what I was doing.”

Not only are the nominees surprised when they find out they were nominated, but they are also shocked when they get to the award ceremony to find their family there and not knowing they won until the description of the winner is read off.

This year, the nominations are due March 11 online. After the nominations are done, the committee of one board member, the previous Gerstacker recipient, the president of the Midland City Education Association (MCEA), the Chair of MCEA and the Director of Administrative Services, chooses four teachers from MPS to win the award. The award is given out on May 12 of this year at the Griswold Center on Northwood Campus.

“This gives us plenty of time to inform family members of this award and if needed, fly them in for the ceremony,” Hawkins-LaGoe said.

Hawkins-LaGoe, Chambers and Watkins all agreed on the importance of students voting for their teachers online. Watkins stressed the fact that taking a minute to show a teacher how much they mean and how important they are is key. Students, teachers and anyone in the Midland community can go to the MPS website to submit their nominations.

One thought on “Award special for local teachers”