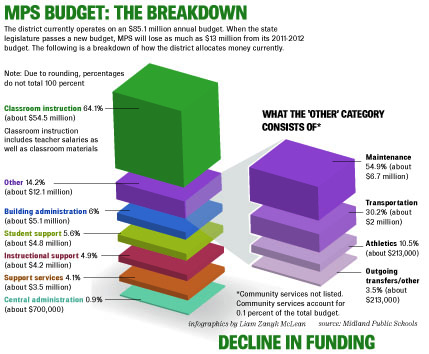 District administrators began preparation last month for a possible $470 per-pupil state cut to education, as proposed in Governor Rick Snyder’s budget. If the budget is approved by the state legislature, the district would lose roughly $13 million out of an $85 million annual operating budget in the 2011-2012 school year.

MPS Finance Director Linda Cline said that the cuts proposed in the governor’s budget are a “worst case scenario” and that the final budget will likely be somewhat different. But even with changes, the cuts to K-12 education will be severe, she said.

This will lead MPS to make drastic cuts of its own. Although the district has a fund balance of around $9 million, it is unclear how much the school board will use to balance its books for the 2011-2012 school year. The district’s budget for next school year is due by July 1. Cline will hold a budget workshop on May 24, a public meeting that examines budgetary information.

“The bottom line is we have to have a positive number,” Cline said.

Cline added that there will be lay-offs as the district faces what are potentially the worst cuts since Proposal A was passed in 1994, which changed the way school districts received money and hurt wealthier districts like MPS.

“What makes it so hard are the size of the cuts and the fact that there have been so many cuts already,” Cline said.

It is likely that employees will be forced to cover a higher percentage of their benefits, as much as 20 percent. If imposed, however, that measure would only save the district about $1.5 million.

In addresses to the state legislature and the media, Snyder has explained that budget cuts should be a quick, one time fix to close the state’s $1.5 billion budget deficit. According to Cline, that is cause for a little optimism.

“The state economy has bottomed out,” Cline said. “Snyder says he wants a quick fix, but we’ll see if that’s the case or not.”

The budget Snyder has proposed represents a shift in education policy for the state and the governor will make an address in April to propose his ideas to reform Michigan’s education system. This address will give school districts a better idea of how academic and budgetary requirements will change under Snyder.

In a measure approved by the state legislature in mid-March, the state government will now be able to appoint emergency financial managers to take control of school districts and communities struggling financially. These measures have been widely protested and have some teachers scared for their jobs.

“They scare the crap out of me,” math teacher Terry Schwartzkopf said. “The ability for the governor to take over cities is disregarding the standards set by democracy. They’ve overstepped their grounds.”

While Schwartzkopf agreed that budget cuts are necessary, he feels that teachers are being targeted by the state legislature.

“Concessions need to be made by everyone and I know the teachers union would give up a little willingly,” he said. “But we shouldn’t be taking the burden when Senators serve for two years and then retire living for the rest of their life on pension.”
In the meantime, Republicans control both houses in the state legislature, which makes it unlikely that the state budget, which is due when the fiscal year starts on Oct. 1, will be drastically different from the proposed one.

That means Cline and numerous other district administrators will be forced to look in all areas of the MPS budget for ways to cut spending.

“We’re not going to get there just by telling everyone to use the backside of their paper,” she said.

Out of the money MPS spends on supplies, roughly half goes toward utilities, which means that cuts to supplies alone won’t get the district anywhere near the $13 million goal. Currently, 64 percent of expenditures go into classroom instruction, which includes roughly $28 million in teacher salaries at the elementary, middle and high school levels.

Cline added that in addition to lay-offs, there will be “some kind of reduction in salaries and benefits.”

The district is currently seeing a decline in enrollment, which Cline is accounting for in her budget estimates. She said that the decline could cost the district $2.4 million next year.

In addition to the $470 per-pupil cut to K-12 education, the state’s 13 public universities will see a 15 percent cut to state funding, if the governor’s budget is passed. The governor added that if universities raise tuition by more than seven percent, universities would see even more funding cuts from the state.

Even with the severe cuts, however, community colleges were left untouched in the governor’s proposal.
Cline said that the reason for this is unclear and that it has left school district administrators across the state confused.

“We’re not sure what makes community colleges special,” Cline said.