“It’s not really about gifts or anything, because we don’t really do gifts,” Dunlap said. “But it’s more of a time to get together with my family with the congregation of my temple.”

Dunlap identifies as Jewish and celebrates Hanukkah or the Festival of Lights. Hanukkah is the celebration of the liberation and rededication of the Temple. This liberation was carried out by the Maccabees, a small force of Jewish fighters, who threw out the Syrian Greeks.

Latkes are fried potato pancakes and a popular Yiddish dish. They became popular in the mid-1880s and since then have been updated to include onions and carrots.

Another Jewish tradition is the game of dreidels. To play dreidels, each player starts out with an equal number of game pieces. Players then put one game piece in a pot or bowl in the middle. Then each player takes turns spinning the dreidel, and each face it lands on determines the total amount of game pieces. The faces of the dreidel are marked with a different Hebrew letter – Nun, Gimel, Hay, and Shin. If the face lands on Nun, then the player does not get anything. However, on Gimel, the player gets all the game pieces in the center pot. With Hay, the player receives half of the contents in the pot. With Shin, the player has to contribute one game piece to the pot. 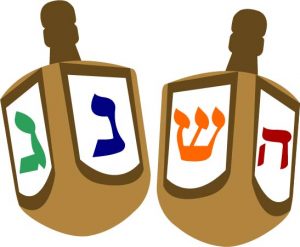 The Menorah has become a symbol of Hanukkah in modern times and has been adapted from the traditional seven-branch menorah to a nine branch one. Eight branches to symbolize the Eights days that the oil burned for and middle candle to represent the shamash and is a servant light, which is used to light the other lights.

The pride of Jewish traditions has become more common among Jews during Hanukkah celebrations in modern times.

“What it means to me and I think to most Jewish people today, is it’s a victory for religious freedom so that the Jews can continue to observe their religion and their holy places could be maintained,” Messing said. “And I think that in today’s world that I think that is the is the main thrust of the holiday.”

Many now see the holiday as the celebration of Judaism as a whole, not just the rededication of the temple.

“Hanukkah to me is a time to really celebrate my religion and like actually profess [my religion],” Dunlap said. “During Hanukkah, I’m really proud of [my religion].”