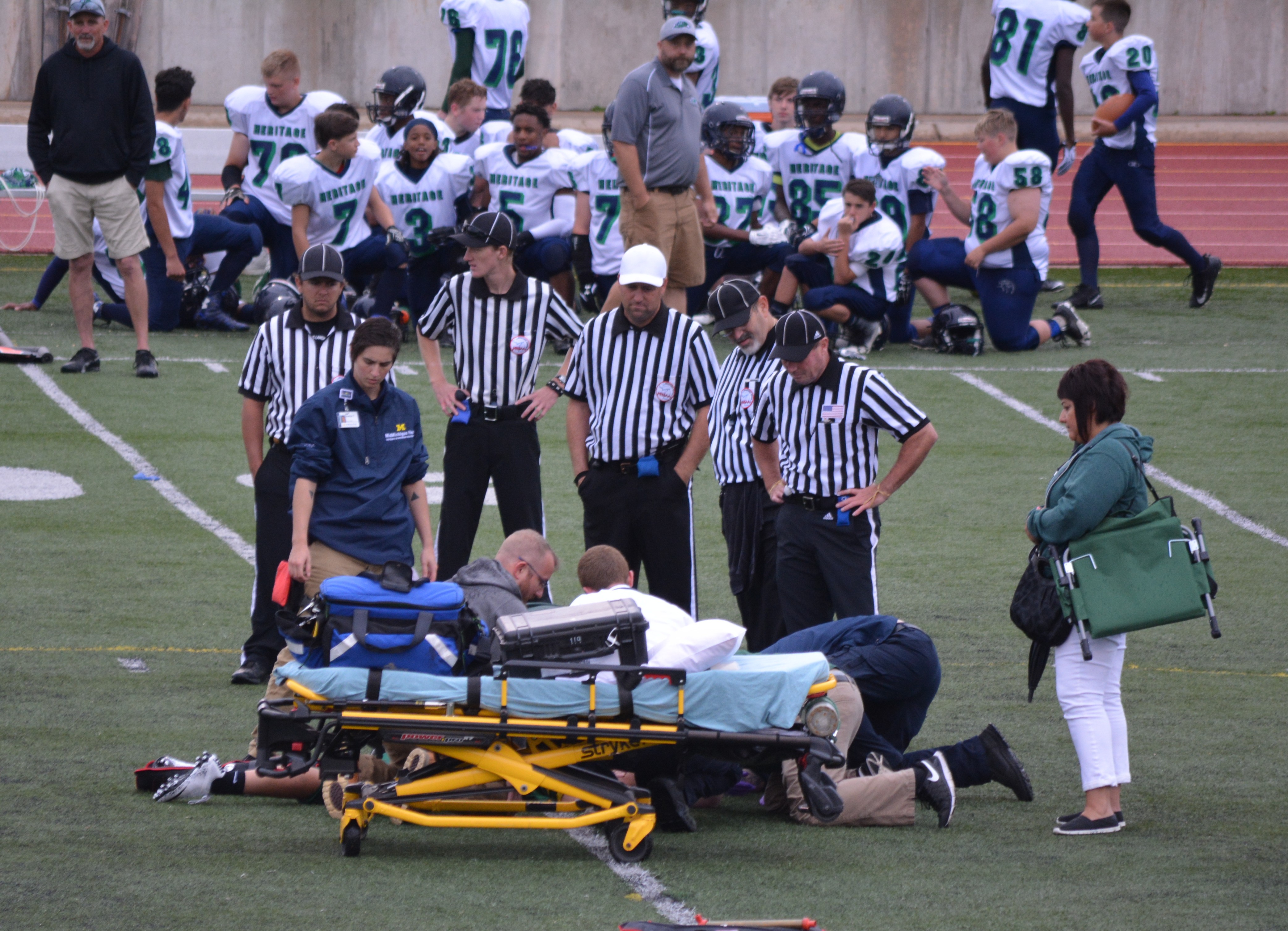 Taking strides to establish new programs and relationships, athletic trainer Katilyn Thomas integrates herself into the competitive atmosphere of DHS sports. Behind the scenes, Thomas makes a number of organizational tweaks and fixes. She is an SVSU graduate who has been in charge of the DHS training and rehabilitation program since August 2017. Injured athletes have come to know her well, but other than that, students might only see her once or twice watching from the sidelines.

Her occupation of high school trainer at DHS is her first job out of college. Thomas is employed at Campus Ridge Physical Therapy through Mid-Michigan Health by day and they transfer her to the high school by night. She has the responsibility of tracking athletes that have been injured. In order to help them fully recover, Thomas oversees the athletes’ progression as they work to restore strength and flexibility.

“Besides from when I was a student, this is my first job by myself,” Thomas said. “I definitely learned a lot. Definitely patience and being competent to working with the coaches, putting my foot down, especially between coaches, the student athletes, and their parents.”

The importance of an athletic trainer is to make sure the athletes are in the best possible condition they can be before they go out and play again. Thomas doesn’t just deal with injuries, she works to prevent them by taping, icing, and stretching.

She is on call after school until practices and games are over in the evening. Thomas uses the example of a standard basketball game to illustrate the dynamics of her position.

“If it’s just one game going on I’m on the sideline usually close to them,” Thomas said. “I have my kit on me at all times and if they need something quick, I’ll do it right on the sideline there. If they need, you know, a Band-Aid or what have you, and then if they get injured on the court and I get called out there and try and get them off the court, so they can keep going. Then I evaluate them, figure out their injury, and then make my decision based on if they can go back in or if I’m pulling them.”

Thomas recalls that several of the athletes she’s worked with this year have been afflicted by ankle issues.

“I tried implementing an ankle injury specific program with volleyball and basketball,” Thomas said. “It didn’t really take, but basketball is doing a program, it’s supposed to be specific for ACL, but it does the whole lower extremity. So it ends up helping the ankles. If that goes well, then yes, I wanted to start implementing it for all sports.”

Sophomore Grace Bremmer was dealing with a sprained ankle during basketball season and worked with Thomas daily to help heal the injury before playing again.

“She showed me all these different exercises to do and the more I improved the more difficult she made them,” Bremmer said. “That was really great to see that, not only my ankle was getting stronger, but it also helped me with other aspects like jumping. She improved my jumping and I really liked when she taped my ankle beforehand because I don’t really like the ankle braces.”

As the school year wanes, Thomas reflects on things she’s learned and enjoyed during her first year working with the athletic program.

“It’s really weird to go from one season to the next because I get all these kids that I just get used to,” Thomas said. “They always come in here, and then new season, new kids. I don’t see the same kids over and over again, so that’s a good part of the job. And they definitely teach me patience and to stand my ground.”

When looking to the future, Thomas is fond of the work that she does helping in the high school and hopes to continue where she is now.