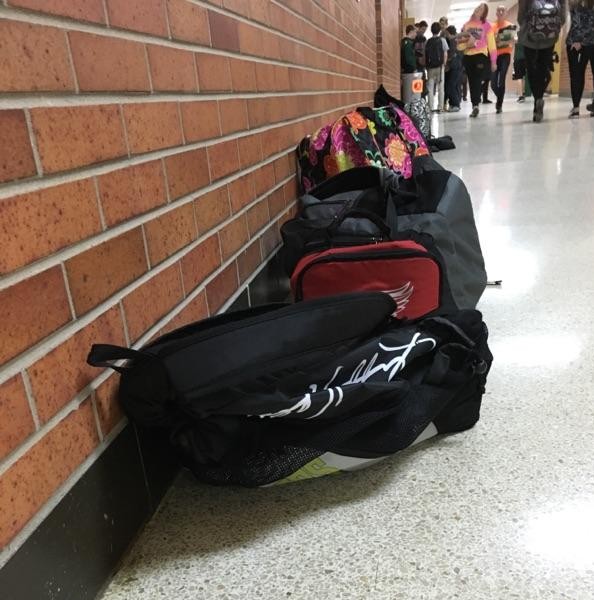 Junior Ashley Rose walks out of her Health Care and Technology 1 classroom with the rest of her peers to head down to the library, backpack on her shoulder. She plans on setting her bag down on the steps and grabbing her books, but can’t due to the recent enforcement of the policy of banning backpacks in the media center. She will either have to put her things in her locker, or leave her backpack in the hallway outside of the media center.

“I think it’s really dumb to be strict about something like this, it’s not a big deal for our backpacks to be just sitting on the steps of the library,” Rose said. “I guess they’re worried about safety for a fire escape or something, but its nice to have your bag there so you can have all of your books with you.”

Media center paraprofessional Stacey Latoski says this is not a new rule that students should be surprised about, and that they should’ve been stricter in the past about the bags.

“This touches more into security and safety hazards,” Latoski said. “The backpacks are in such a disarray by the end of the day, its ridiculous. If there was a fire per say, and we all had to leave with the bags being scattered all over the steps it would not allow appropriate exiting. Teachers and even students can’t get down the stairs with the bags all over, it was just a ridiculous amount.”

Miriam Bloom, co-paraprofessional for the media center agrees with Latoski.

“It’s certainly helped to keep the stairs clear because students were just dropping them as they walked in, that was definitely one of the bigger issues,” Bloom said. “It was becoming a safety hazard.”

The decision to enforce the policy was not a random thought, there was a breaking point for both staff and administration with the amount of bags on the steps. It started affecting student’s and teacher’s ability to walk safely down the stairs.

“The day I realized we had to actually be strict about this was when I worked until the afternoon, and we had to move stuff aside to actually get down the steps,” Latoski said. “That’s when I realized we have to really do something about this. I usually work in the mornings, so I didn’t know it was going on to that extent. So Ms. Kastl walked by and saw the disarray of bags and saw how ridiculous it was, and she agreed with me. We both think its okay to tell you students you know you have lockers. Try to plan ahead. Even though its an inconvenience, there are appropriate places to keep your bags, but the library is not one of them.”

Students like Rose and junior Sara Kollig disagree with the thought of having to leave their bags in their lockers and question the timing of the enforcement.

“It’s kind of annoying because there isn’t a spot for outside of the library, so I either have to go all the way back to my locker to get my stuff or go out into the hall,” Kollig said. “It’s like why are they enforcing it now if it’s been a rule since forever?  It wasn’t creating a huge problem before so it’s just weird that they decide all of a sudden that they’re going to be strict about it.”

Although disagreement rises between students and administration, students have gotten used to the policy with ease.

“There hasn’t really been a big reaction from me or my friends, like we’re used to it now but we all are just wondering like why and why now,” Kollig said.