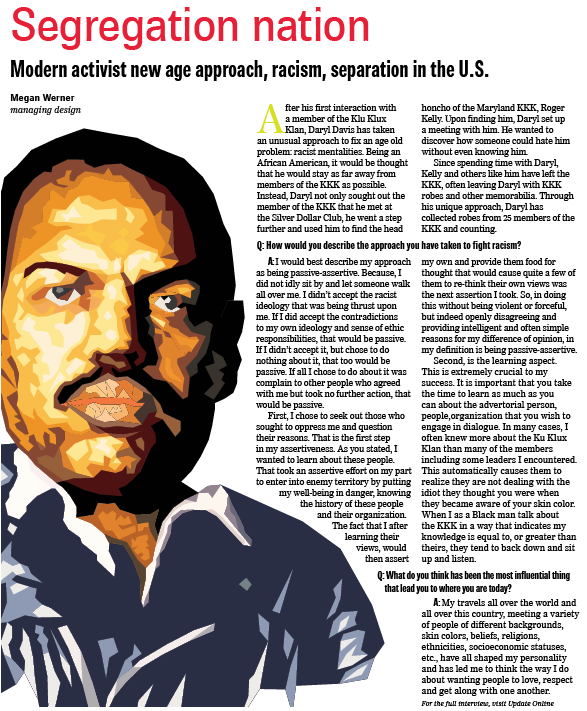 1. What do you believe is the status of racism in the US?

2. Do you believe notable progress has been made by our country as a whole to help stop racism in the US?

Notable progress has been made to reduce racism, but NO, notable progress by our to country to stop racism, has NOT been made. Too much time is spent with opposite sides on the racism issue talking to the media and not to each other. My success lies in the fact that I will sit down and have a conversation with those who at the most hate me and would like to see me dead, or at the least those who disagree with me. There is a lot of hypocrisy from those who claim they are anti-racist, when they won’t even take the time to speak the those whom they oppose, because of a differing views. Essentially, they are behaving like the exact prejudicial manner they are opposing.

3. What have you been doing to help fight racism?

I have been doing exactly what most people have not. I have been inviting those who oppose or even hate me, to the table for conversation. As a result, I have had some amazing and successful results.

4. Do you believe enough is being done to help fight racism?

Again, NO, I do not. Here is just one example: Prior to 9/11, our nation was very divided, along racial lines, socio-economic lines, political party affiliations, and other differences. When we were attacked, ALL Americans put those differences aside and pulled together and we became ONE. At that point, we truly became the “UNITED” States of America. However, as time moved forward and 9/11 was becoming smaller in our rearview mirror, we drifted back to our previous status of discriminating against one another. In other words, we didn’t learn anything and we had a relapse. Often times with medical conditions such as pneumonia, weight gain, and cancer, the relapse is worse than the original condition. We are now right back to where we were pre-9/11. This is because we did not have a mechanism in place to keep us together. We should have learned that lesson in order to avoid a repeat. Still to this day, we don’t really have mechanisms in place to keep us together and keep the lines of communication open between people who may disagree with one another. There is nothing wrong with disagreeing, but we should be able to discuss our differing viewpoints with each other instead of only discussing them with news media outlets. I don’t have a problem with people talking to CNN, MSNBC, FOX or any other news agency, I do it myself. But, unlike many other people, I will also sit down off-camera and have discussions with my opponents and adversaries.

5. How would you describe the approach you have taken to fight racism?

6. What has influenced you the most to take this approach?

I am answering questions 5 & 6 with this answer: I would best describe my approach as being passive-assertive (unlike passive-aggressive which I’ll explain in a moment). Because, I did not idly sit by and let someone walk all over me. I didn’t accept the racist ideology that was being thrust upon me. If I did accept the contradictions to my own ideology and sense of ethic responsibilities, that would be passive. If I didn’t accept it, but chose to do nothing about it, that too would be passive. If all I chose to do about it was complain to other people who agreed with me but took no further action, that would be passive.

First, I chose to seek out those who sought to oppress me and question their reasons. That is the first step in my assertiveness. As you stated, I wanted to learn about these people. That took an assertive effort on my part to enter into enemy territory by putting my well – being in danger, knowing the history of these people and their organization. The fact that I, after learning their views, would then assert my own and provide them food for thought that would cause quite a few of them to re-think their own views was the next assertion I took. So, in doing this without being violent or forceful, but indeed openly disagreeing and providing intelligent and often simple reasons for my difference of opinion, in my definition is being passive-assertive. Although the term “passive-aggressive” is often used, I think in this case it would be a symbiotic dichotomy. The term aggressive implies the presence of some type of force. It comes from the word “aggress,” which is a very close cousin to the word “aggravate.” If you are aggressive with someone, you will no doubt aggravate them and the likelihood of any positive results will probably not be forthcoming. So, in my opinion “passive- aggressive” is a misnomer and can’t have two opposites working hand-in-hand.

Second, is the learning aspect. This is extremely crucial to my success. It is important that you take the time to learn as much as you can about the adversarial person, people, organization that you wish to engage in dialogue. In many cases, I often knew more about the Ku Klux Klan than many of the members including some leaders I encountered. This automatically causes them to realize they are not dealing with the idiot they thought you were when they became aware of your skin color. Similarly, because for no other reason than the fact that you are a woman, you are a target of car dealers and auto repair garages. Many of these people pre-judge your intelligence the second they see you walk through their door. Thus the word “prejudice.” They automatically think you know nothing about cars and they will sell you a car at the most expensive price and try to make you believe they are giving you the deal of the millennium. They would never attempt to try this if a male walked through the door, because it is already assumed that men know about cars. The same thing applies when a woman goes to get a simple problem on her car fixed. She often ends up paying for all kinds of things that don’t need to be fixed but somehow the mechanic has convinced her they are all connected. (Because your windshield wipers don’t work, you need to buy 4 new tires and that will fix the problem). This is why women are often told, “Take a man with you when you go to buy a car or you go to have one fixed.” So the best strategy for leveling the playing field is to learn more about your subject and the arena in which he exists than he knows. As soon as you walk into the dealership or mechanic and talk like you know as much about cars as they do, you suddenly command a whole lot more respect. Similarly, when I as a Black man talk about the KKK in a way that indicates my knowledge is equal to, or greater than theirs, they tend to back down and sit up and listen.

7. Do you have anyone in your life that has influenced you to work like this?

8. Is there anyone in history that has influenced you to work like this?

“I am answering both questions 7 & 8 with this answer: I have quite a few role models. Here are some of them.

9. What moment in your career as an activists has had the largest negative impact on you?

10. What is the driving force behind what you are doing?

Seeing the light bulb pop on in the heads of those people who have changed for the better and knowing that they too, will make a positive difference in the lives of others.

11. What kind of an impact do you hope to make?

I have already made an impact and hope to continue doing so. I have influenced certain people’s decisions to leave the Ku Klux Klan and neo-Nazi groups and this has reduced the amount of racism in the society in which I live. It has not eradicated it completely, but things happen in steps and I see the right steps being taken.

12. Do you recommend other people try to take the approach you are towards racism?

It works for me and I strongly advocate and endorse it. But, I would also say, have your act together and know exactly what you are talking about and how to respectfully handle various personalities without patronizing their beliefs, and yet being able to assert your own in a non-offensive and intelligent, influential manner.

13. Do you apply this approach to your daily life?

As much as I can.

14. What was your reaction when the Maryland KKK fell?

15. How many robes have you collected?

I haven’t counted lately, but I think there might be 25 or 26. I am getting another one shortly. However, I have a ton of other KKK items given to me by those who quit, which I keep locked up off site.

16. Approximately how many functions/rallies/assemblies for the KKK have you attended?

Too many to count. I’ve been doing this over 30 years. But, if anyone attends just one KKK function/rally/ assembly, that’s one too many.

17. Have you been asked to speak anywhere about your platform and what you are doing? If so, how many times and where?

I speak all the time, all over this country and overseas as well. I give 50 to 60 lectures per year and have been doing so for a couple decades.

18. What do you think has been the most important/influential thing that lead you to where you are today?

My travels all over the world and all over this country, meeting a variety of people of different backgrounds, skin colors, beliefs, religions, ethnicities, socio-economic statuses, etc., have all shaped my personality and has led me to think the way I do about wanting people to love, respect and get along with one another.

19. Have you ever received threats from people telling you to stop doing what you are? If so, from who and approximately how many?

Yes, every once in a while I will receive threats in person and anonymously, and unfortunately, there have been times when I have had to even resort to violence in the interest of self-preservation. These threats have come from both Black and White supremacists.

Baczewski stars in “A Christmas Story: The Musical”