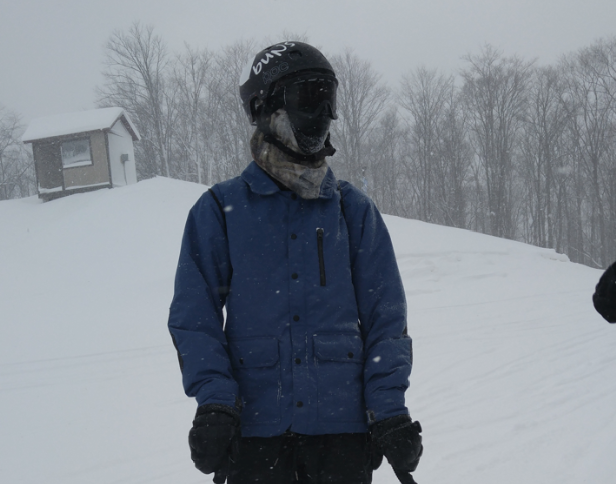 Everyone has their own “thing.” From football to competition math, students at DHS occupy themselves with a variety of hobbies and passions. This winter, senior Andrew Pumford will be honing his skills in a sport where he can flex his creativity and free spirit: skiing.

Skiing has always been something Pumford loved to do, but at age 14, freeskiing became his obsession.

“I remember when I learned my first three-sixty, and I remember the dude that taught me,” Pumford said. “And from that point on I was into it.”

The art of freeskiing, otherwise known as freestyle skiing or park skiing, involves absolute control of one’s body in order to perform tricks off jumps, on rails, and other terrain park features. But for Pumford, freeskiing is more than doing the coolest trick, or the most technical maneuver. Freeskiing is about the freedom to do whatever the skier feels, escaping from the rules and rigidity of organized sports.

“I prefer un-organized sports compared to organized sports,” Pumford said. “Mostly because I don’t like coaches, and I’ve never had a coach that I liked.”

Despite his passion for disconformity, and perhaps fueling his love for the freedom of his sport, Pumford has competed in some freeskiing events.

“I’ve tried a few freestyle skiing competitions, USASA competitions,” Pumford said. “I just don’t like them. It’s so organized, you have to wait like two hours to take a run, and then you have people judging you, and it’s their opinion. So I just like doing it for my own fun.”

Pumford enjoys skiing whenever he can, and having a cottage at Boyne Mountain gives him ample opportunity to do so. However, his most memorable experience on the skis did not come on his home turf.

“My favorite place to ski is Mt. Hood in Oregon,” Pumford said. “I went there for a week when I was 16 and that was just a blast. You’re on a snowfield and it’s the middle of summer, and your skiing and its 60 degrees out and sunny. That was the best, for sure [my] best experience.”

For others interested in freeskiing or getting into skiing at all, Pumford recommends just going to the closest and cheapest place. Skiing can be an expensive hobby, so getting a feel for the sport before fully committing is recommended.