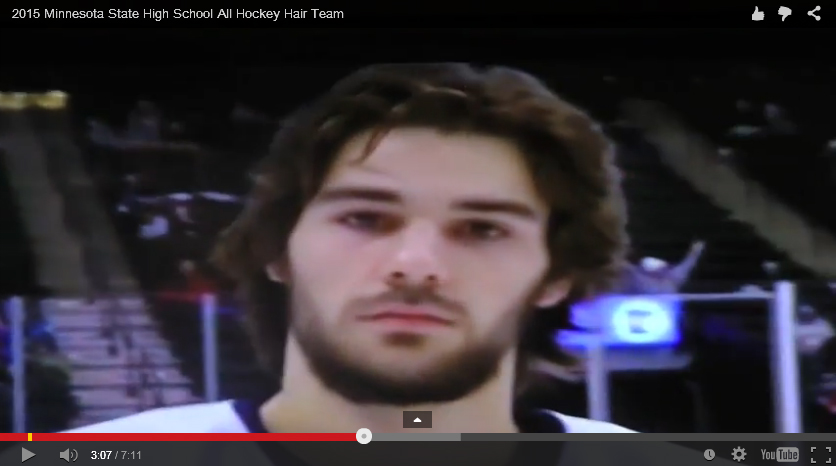 With over one million views to date, the “2015 Minnesota State High School All Hockey Hair Team” video flowed onto YouTube on March 7. The narrator published the video from the account PulltabProductions, making it his fifth video since the original popular video in 2011.

The hockey hair videos have gone viral for the narrator’s amusing commentary as he ranks the hair of players at the Minnesota State Hockey Tournament.

After spray painting his metallic gold combs and talking about his new algorithm for the competition, the narrator went on to rank the top ten players on the hockey hair all state team followed by honorable mentions. T.J. Oshie and Blake Wheeler also made appearances in the video to congratulate the team.

“I think the guy who created [the video] has a tremendous amount of creativity, and I really like how he makes it all about the student athletes,” DHS alum Sean Zanyk McLean said. “He emphasizes the importance of a good hair game, and as a former hockey player, I think good hair is essential for hockey.”

Since the videos have increased in popularity year after year, PulltabProductions decided to join forces with Warrior Hockey. Once 100,000 views on this year’s video were reached, Warrior donated $15,000 to the Hendrickson Foundation, an organization supporting disabled athletes and the military.

Senior Joe Fiori, who some say is an expert on getting the perfect hockey hair, played for the DHS varsity team last season. He thought the video displayed the fact that hair plays an integral role in hockey.

“The flow is a very important part of the game,” Fiori said. “You look good, you feel good, you play good.”

The DHS hockey season may be over, but hockey hair lives on. Watch the video here: