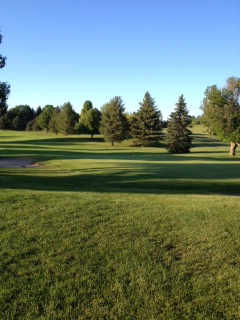 For those who enjoy golf, spring time can be one of the most exciting times of the year. With all the snow finally melting away and after watching at least some of the Masters golf tournament at Augusta National, many of them are just dying get out to the course and play a round. This can difficult to do in Midland because of flooding that typically occurs and the fact that most golf courses are reluctant to open so early because of all the damage a course endures from spring play. However, one place in Midland County that is open and allows golfers to play all 18 holes is Sandy Ridge Golf Course, located in between the City of Midland and Auburn.

Sandy Ridge plays at 6,409 yards, which is considered shorter than an average course, however they can make it seem much longer than that. Some of the holes are what golfers term as “dog legs”, this means that they start off relatively straight with respect to the tee box, however they then take a turn left or right before reaching the green. These dog leg holes usually have dense patches of trees lined up on the sides of them that can cause great trouble if one hits into them. This causes most people who play the hole to hit clubs that they are more accurate with and make the ball go shorter and try to get their ball to land at the point where the hole begins to turn left of right, giving them a chance to hit their second shot onto the green with the hopes of making a birdie. Junior Ben Morgan, who has played the course many times, finds that these holes can cause great trouble to those who aren’t very accurate.

“With Sandy Ridge, it’s all about being accurate off the tee, you have to know where your ball is going and you can’t be too aggressive and hit driver with the hopes of hitting it further,” Morgan said. “With most of the dog legs, laying up and hitting an iron is the way to go.”

Another feature of Sandy Ridge is that it incorporates wild life and nature into its course design When playing Sandy Ridge, one can feel quite secluded from the other golfers because of all the forestry that runs along the course. Many of the holes run next to woods and forests that many animals including white tail deer, foxes, rabbits and turkeys call home. Seeing one of these animals can be an additional bonus of playing Sandy Ridge that makes it differ from other courses in the area. Something else Sandy Ridge has done in order to utilize the nature already there was they designed holes around natural wetlands, turning these ponds into hazards. This is something that senior Derek Striker has noticed.

“There are a lot of areas on the course that were wetlands and ponds that they turned into hazards,” Striker said. “They aren’t a good place to hit your ball because you probably won’t be able to get it back.”

One of the signature holes at Sandy Ridge is the par 3 seventh. This is considered by many to be one of the hardest holes on the course. Playing from the furthest tees, the is hole is 155 yards however the tees are elevated in comparison with the green. Since the tees are substantially higher, one has to always consider how strong the wind is and the direction of the wind before hitting their shot. Players also hit their shot onto an island green. The front, back and left side of the green is all covered by a large pond and the right side is protected by a deep bunker. This means that unless a player wants to face trouble, they must be accurate and hit the green on their first shot. Senior Davis Milholland finds this to be one of his favorite holes on the course.

“The hole is cool because it can play in so many different ways depending on where the pin is on the green, if it is closer to the water or what way and how hard the wind is blowing, it just always keep you  guessing,” Milholland said.

Sandy Ridge is currentely open and continues to remain open for the rest of spring pending the weather. As long as the fairways and greens are not soaked in water, they remain waiting ready for competition.