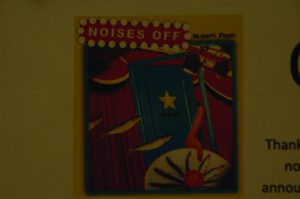 The upcoming fall play “Noises Off” will be in many ways just like all the other ones: there will be drama, complex characters, and will have an interesting plot line, but there’s one major difference. The set moves. Instead of the normal two-act play, this one has three, and during both of the intermissions the entire set will rotate 180 degrees, giving the audience a look at both the front and the back of the stage.

“Noises Off” is a play within a play. It revolves around a production crew’s attempt to put on a show, and the audience will get to see everything: all their mistakes, all the drama taking place backstage and how the initial rehearsals, both front and backstage, will lead to the finale: the final performance.

CMS stage director, Jeff Hayes, picked the show with some suggestions from current and older DHS drama students. The play itself has actually been done twice before, most recently fifteen years ago, when current DHS drama director Amy Bushey directed the show in the DHS Little Theatre. It was also done by previous DHS drama director, Mr. Reilly.

“[‘Noises Off’] is a standard of theater, and a beloved work of farce,” Hayes said. “Students get input, but the final decision for this was from myself and my assistant director, Ms. Molly Stewart. We do have to choose a show to direct that we can both get into and be excited about it.”

The planned two-story set will begin as a series of platforms amounting to a false floor on casters. The walls, windows, stairs and doors will all be built on top of this false floor to make up the play’s set. Hayes’ hope is that the set will be able to flip as one whole piece; however, because of limited space there are also back-up plans to break it up into two smaller pieces.

“We can use all hands on deck,” Hayes said. “Even if you have never participated in theater before, we can use you to help build, paint and decorate this set.”

Although the set is fairly ambitious compared to previous fall play productions, most of the set will be recycled once the show is finished, as Hayes can’t see the drama crew using any of it for the upcoming spring production, “Legally Blonde”.

“Like so much in theater, this is here for this show, and goes away – back into stock bits and pieces the day after the show is closed, to be recycled into the next shows,” Hayes said. “It’s (pardon the pun) a revolving world in theater – one show finishes and you’re right on to the next one.”

Despite having performed “Noises Off” twice before, the DHS drama club has never attempted to perform it at the Central Middle School stage. The stage will allow for a bigger and more ambitious set than before, and the drama club will need all the help it can get for its fast approaching production.