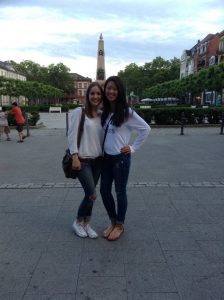 Most students at DHS receive relatively the same learning experience throughout high school: six or seven classes a day in the same building, same group of teachers, same peers for four years. However, the education of some DHS German students reached a new level of immersion when the opportunity for an exchange program, The Friendship Connection, arose in September 2012.

“I really didn’t think I wanted to do the program and didn’t think my parents would be on board so I passed the deadline, but then all the doors were open at once and I was able to sign up,” junior Joyce Chu said.

After hearing about the program in her IB German class, Chu sent in a profile about herself and her interests and was then paired with a German student who the program thought she would interact well with. Vivi Britz, her partner, had been considering the program for some time and was excited to make the trip to America that spring.

“I wanted to risk this because I really like America and the idea of exchange and living in an American family,” Britz said. “So I tried it and I had so much luck!”

Britz spent a month living with the Chu family, attending DHS and participating in all the normal American teenage things that Chu did on a daily basis. They played tennis, explored Midland, attended concerts and sleepovers and even took a trip to Chicago. The two were also able to celebrate their sweet 16 together, as their birthdays fell only a couple days apart. The America Britz experienced may not have been quite as musical as the “High School Musical” image she had of the United States, but it exceeded her expectations nonetheless.

“People are really open and nice to newcomers,” Britz said. “The school was just like a high school [I imagined] and I lived the American life or better.”

Next, it was Chu’s turn to travel to Germany and switch roles with Britz as the foreigner in Germany. Despite being thrilled with how her pairing worked out, Chu was still nervous about being thrust into this new situation.

“After I met Vivi, I was really excited to visit her in Germany because it’d be my first time in Europe,” Chu said. “I was nervous about the language barrier because my German was simply terrible pre-Germany.”

However, her skills quickly improved and Chu made the most of her trip, even attending a formal dance at Vivi’s school and taking a trip with her family to Paris. Like Britz, Chu was also surprised by the how her expectations compared to the actual city.

“I expected Wiesbaden, Germany, where Vivi lived, to be your stereotypical Bayern town – like what Frankenmuth imitates – but I was totally wrong,” Chu said. “It was like any modern city.”

Along with being part of a new culture and improving their language skills, Chu and Britz gained a special friendship with each other that now reaches all the way across the Atlantic Ocean. They plan on keeping in touch in the future and are even hoping to meet in each other’s home countries again.  Both girls agreed that being part of the exchange was a great experience.  Chu encouraged other students to seize the opportunity of taking part in an exchange program.

“Go do it!” Chu said.  “It was by far the most eye-opening experience of my life. You meet some amazing people.”