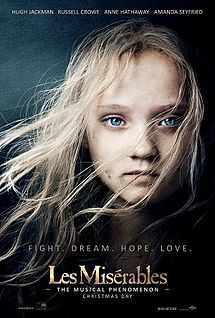 Recently, Working Title Films took the award-winning Broadway show of “Les Misérables” and spun it into a now award-winning film. The show is a sung-through musical play based on the same-name novel by French poet and playwright Victor Hugo.

Set in 19th century France, the drama interlaces a tale of love, revolution and redemption with an impressive cast. Each cast member well embodies their part and translates a story that captures watchers’ emotions and toys with them throughout the movie.

The movie synopsis (without any spoilers) begins with prisoners singing “Look Down”, which introduces the viewers to the universal feelings of deprivation and desperation throughout the movie. A prisoner, Jean Valjean (Hugh Jackman), has just finished his sentence in prison after 19 winters of arduous work. His crime, stealing a loaf of broad, leaves him on parole and marks him a dangerous man for life. He breaks parole, creating a new life for himself while evading the grip of the ruthless Inspector Javert (Russell Crowe) who has vowed to find Valjean and bring him to justice.

Valjean turns his life around, becoming a factory owner and mayor of Montreuil-sur-Mer eight years after breaking probation. A worker of his, Fantine (Anne Hathaway), is discovered to be sending money to her illegitimate daughter, Cosette (Isabelle Allen) and is dismissed. Due to desperation and her lack of money, Fantine becomes a prostitute. Her struggle brings on the award-winning adaption of “I Dreamed a Dream” sung beautifully and stirringly by Hathaway, even bringing many in the theatre to tears.

Later, during a conflict on the streets, Javert, now a police inspector, arrests Fantine. Valjean, surprisingly nearby, intervenes the arrest and takes her to a hospital. He promises the dying Fantine that he will look after her daughter. On the run from Javert, who has discovered his façade, Valjean finds Cosette residing with the Thénardiers who are evil innkeepers and put Cosette to difficult work (think of them like the stepmother in Cinderella). Valjean pays them, takes her, and promises to be like a father to her.

Nine years later, students Marius Pontmercy (Eddie Redmayne) and Enjolras (Aaron Tveit), together with street urchin Gavroche (Daniel Huttlestone), discuss a fermenting revolution against the monarch. Later Marius catches a glimpse of Cosette (Amanda Seyfried), now a young woman, and instantly falls in love with her. Meanwhile, despite her questioning, Valjean refuses to tell Cosette about his past or Fantine.

Éponine (Samantha Barks), Marius’s friend, leads him to Cosette, where the two serenade their love to one another. Éponine, stuck on the sidelines, is mournful that her secret love for Marius will never be reciprocated. She decides to join the revolution, bringing on the famous and heart-wrenching song “On My Own”. Later, Valjean believes that Javert has discovered him once more, and flees with Cosette.

Following this, all chaos ensues, and the movie becomes slightly more difficult to follow. The next day, the students begin their assault and the movie evolves and pursues into cries of lost lives, love and vengeance. The fate of Valjean in question, the movie continues to follow him escaping from Javert and enduring through the revolution.

As shown through its summary, a fault of the movie is its difficulty to follow. However, this cannot be blamed on the movie as it is a fault of the musical itself. In spite of this, the show could have been cut down slightly to better fit a screenplay rather than an onstage production.

On that note, when seeing a show onstage, viewers are not easily able to see the actors’ faces or expressions. Therefore, briefly sung lines or soliloquys are written to express the emotions the character is supposed to be feeling. However, in a movie, the camera is able to zoom close on actors’ faces and these small interludes are not needed. Some of the singing that filled the empty spaces in between the big numbers could have been cut, relieving viewers from the constant singing as well. Some more songs could have been cut as well for time-efficiency.

The final criticism of the movie would have to be the British accents. The movie is set in France and each ‘type’ of character was given a different regional British accents. The street urchins sounded Cockney, the factory workers were from Yorkshire or nearby and so on. This interpretation just didn’t make sense with the setting of the story. It could definitely leave viewers confused as to the origin of the characters.

Overall, the movie was definitely worthwhile to see. It combined many emotional experiences with revolution and desperation for a well-rounded and riveting watch. Anyone could see this movie; however, there are some graphic scenes so view with discretion.