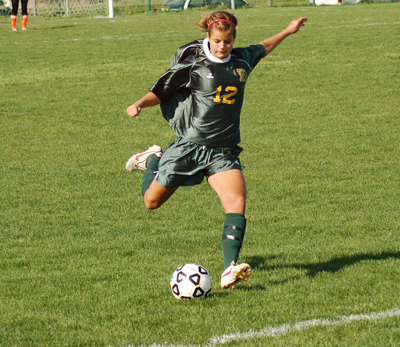 When asked if he thought that he would be playing college athletics in college, during his freshman year in high school, senior Eric Schwenk didn’t think he had much of a chance.

“It was always a dream,” he said. “Even last year if I was asked if I thought I’d be playing college athletics, I’d say no. I didn’t think people would be interested in me. But when schools showed interest, it changed what I thought about it.”

After completing a 2010 all-state season, Schwenk was able to narrow his college search to a few select schools through looking at where his football career would best be suited to continue. Schwenk narrowed his choices to Ferris State, Saginaw Valley State, Michigan Tech and others. He eventually chose Michigan Tech after visiting.

“Michigan Tech called me once a week, while everybody else emailed a lot,” he said. “When I visited Michigan Tech, it was my first scheduled visit so I thought I’d use that as a run through, but I ended up really enjoying it. It really seemed like a family. It wasn’t a lot of individuals, everybody was really nice.”

For junior Lindsey Lee, the situation was very similar. She narrowed her choices down to a couple of schools before choosing Western Michigan. Lee explained that her visit, like Schwenk’s, was a huge tipping point in her choice.

“My travel coach told me that Western had called him and that they wanted to talk to me,” she explained. “Then I called them and set up a visit and made my visit. Right after I visited I got an offer, but didn’t think it was the right fit for me. Two days later, I visited Miami of Ohio and it was the complete opposite. At that point, I knew that I wanted to go to Western.”

In order to get the ball rolling, Schwenk says he had a lot of help from his parents in various ways, including making a highlight reel tape to send to various collegiate coaches. However, the pressure from his parents to choose a certain school was nonexistent according to Schwenk.

“I could tell what [my parents] were leaning towards,” he said. “But there wasn’t any pressure from them to choose a certain school over another.”

For Lee, her parents just had one wish.

Jake Riepma, a senior athlete, had an interesting situation. His father, Pat Riepma, was once the local Northwood Timberwolves head football coach, giving Jake reason to choose the school as his future. Yet Jake pushed the same principles as Lee’s.

“My parents were both very supportive,” Riepma said. “They both really stressed figuring it out for yourself and looking at all aspects of a college.”

The change from high school to college athletics will be unexpectedly large. Games will be longer. Players will be faster and bigger. To prepare for the jump, both Schwenk and Lee plan on training a large amount over the summer before their freshman year of college.

“[Michigan Tech] will send me a workout, letting me know what to start to do to prepare for the season,” Schwenk said. “I’m looking forward to learning more about the game and getting in better shape.”

Along with summer workouts, Schwenk will be starting his college life earlier than most, as he must arrive early for “two-a-day” practices to get ready for the season.

“I’ll miss my friends, but leaving early will be better for me in the long run as I’ll be able to find all my classes and check out the campus before everybody else arrives,” he said.

In the larger college life, some students have a problem finding their place or group that they best fit in. Schwenk says knowing people right away at college will make the transition process easier and let him focus on his academics as long as his athletics.

“It’ll be nice in the beginning to have 35 to 40 incoming freshman with you and having them all go through the same things as you are,” Schwenk said. “The coaches really focus on academics. They make you go to a study hall five times a week and you have to check in each week with your grades. We get to go earlier than other freshman and schedule our classes first, that way the older players let us know what players are good and which ones aren’t.”

For Riepma, he’s just looking forward to going through the challenge with another group of guys, a “family” as he called it.

“I know at NU the football guys hang out together and stick together,” he said. “It will be a challenge, but I’m looking forward to becoming the best football player I can be.”