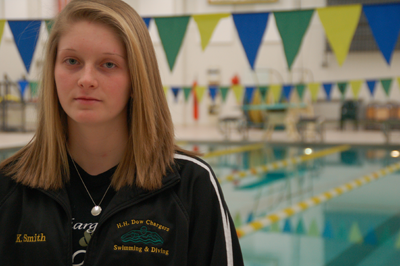 Kelsey Smith contracted dystonia in her sophomore year, making it more difficult for her to swim. Photo by Nick Kivi

Senior Kelsey Smith can’t remember a time when she wasn’t swimming. The 500 freestyle was her specialty until her sophomore year when she found out she had dystonia, a movement disorder that causes the muscles to contract and spasm involuntarily. It not only affected her neck muscles, causing her voice to quiver, but also her right hip. She lost the ability to kick fluidly while swimming on her stomach, a crucial part of the 500 freestyle. This disease affected her not only physically but also emotionally.

“The biggest thing that was taken away from me was my self confidence,” Smith said. “When I found out I had the disease and was getting slower and slower I was really embarrassed to go out and swim in front of people.”

Through tears and emotional breakdowns, Smith made it through her junior year of swim. She recalls it as a year of self-sympathy, questioning why she had to live with this disease.

“My junior year I basically felt sorry for myself whereas my senior year I tried to get stronger,” Smith said. “I focused on getting stronger at back stroke rather than focus on the negative which would be the freestyle.”

Although the freestyle was no longer an option, she figured out dystonia only affected her when she swam on her stomach, not when she was on her back. This made the back stroke a perfect option.

Not only did the back stroke help Smith overcome the challenge dystonia placed in front of her, but by simply accepting the disease she was able to confront it.

“I’ve learned that you should keep doing what you’re doing even though people don’t know what’s wrong with you,” Smith said. “When you find out you have a disease you just try to beat it and show that it doesn’t matter who you are, you can do whatever you want.”

During her junior year, Smith continually asked herself, “Why me? Why would I have to get this?” Now, if she was asked if she could change the past few years of her life would she, she’d reply, “No, because it teaches you to respect yourself. To show yourself how strong you can be and show others that you’re strong enough to fight through it.”

In fact, she feels lucky to have had confronted this obstacle because it’s given her an advantage: a new perspective on life. She now possesses the ability to understand others with disabilities. Not only that, but Smith has realized swimming is truly more than just winning or losing.

“I just thought of [myself as] someone else on the swim team who wants to go fast,” Smith said. “It showed me that I have to give up some of the really important things so that I could take care of other important things like the team. I had to give up parts of my life to open new doors which really showed me who I was and who I’m going to be.”

Smith not only found a new event to master but she also led the team as a captain. She focused on emphasizing not only winning but also on having fun and coming together as a team. Senior and teammate Paige Stavely took note of Smith’s change from her junior to senior year.

“Last year was a struggle to watch Kelsey go through this and handle this disease, but this year she’s totally done a 180 and she’s changed her life around,” said Stavely. “She tries really hard and sets such a good example for the team and I couldn’t be more proud of her.”

Through overcoming dystonia, Smith has inspired and motivated her teammates. She’s shown how strong she can be to both herself and her team.

“She’s such a strong person and to see someone go through that and come out on top and be able to do things your body shouldn’t let you is just amazing,” Stavely said.

Not only did her teammates see the strength in Smith but her coach, Gary Strickler, also did. He was a motivator for Smith who often got frustrated and broke down during practices.

“When I would break down, the main thing that he said was that I just need to keep pushing myself, and that I shouldn’t stop,” Smith said. “That’s one of the best qualities that he sees in me which kept me going.”

As a coach, Strickler wanted to find a way for Smith to be successful. He worked with her to figure out that back stroke was the best event for her.

When the swim team went to Valleys, Smith showed how hard work can pay off. She swam a tremendous race and dropped six seconds off of her best time, a perfect way to end a successful career.

“I have to tell you, I was probably happier with her performance than any other performance,” Strickler said.  “It was like, yeah she did it! She never backed down, she never quit.”

The obstacles that Smith overcame throughout her swim career are evident. Her admirable outlook on her disease was noted by her coach and teammates.

“It was remarkable,” Strickler said. “It’s very heart-warming to see someone be that successful under those types of conditions.”

Even though the process was difficult, Smith still found a way to continue doing what she loves, swim. She wouldn’t change anything about the past few years.

“I feel lucky because once you have something like a disease it really shows you how strong of a person you can be,” Smith said.

One thought on “Swimmer overcomes illness”