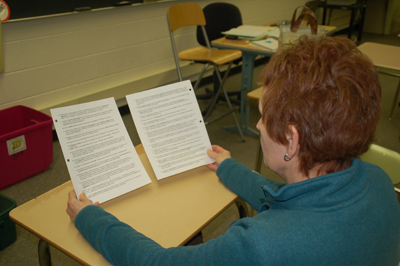 This year, after the conclusion of second semester, the administration decided to put an academic integrity policy in place. The issue of the new policy came up after teachers noticed a larger amount of students who violated the original policy that focused on plagiarism.

Scholastic dishonesty, cheating, plagiarism, furnishing false information, creating an improper information, theft/damage of intellectual property, selling or distributing materials or collusion are the offenses that students may be penalized for.

One of the main differences between the old and new policy is the depth of the content. In the planner, under Prohibited Student Conduct, number 8, it reads: “Engaging in academic dishonesty, including cheating, intentionally plagiarizing, wrongfully giving or receiving help during an academic examination, and wrongfully obtaining test copies or scores.”

After an incident is suspected, the teacher will give the student notice of the allegations. They will then have the opportunity to explain themselves. At that point, the teacher will take appropriate disciplinary actions when it has been determined that the incident did occur. It is explained in the policy that the consequence for academic misconduct will always be more severe than the consequences for failing to turn in or complete an assignment or take the test/exam/assessment.

The policy will include the following consequences for the violations stated in the policy. The first time a student is caught, they receive zero credit for the assignment or exam. They will possibly fail the course based on the weight of the exam or assignment. The student will be given the opportunity to complete the assignment or exam at the teacher’s discretion at no credit. The incident is then reported to the department head and documented by the dean as a disciplinary incident. The parent/guardians are then notified by an administrator of possible course failure.

“The issue has always been outlined in [the] Prohibited Student Conduct,” Cronkright said (see pg. 8 of the Student Handbook). “However, recently it has become an enacted policy based on the influx in incidents across the building.”

Even with the basis of the issue already outlined, teachers still found that cheating was occurring in their classrooms. English teacher Betty Meyette encountered plagiarism in journal entries that were turned in on a choice book the class read.

“Two of them I found immediately online,” Meyette said. “They were two that I had graded early. A couple of papers were simply copied. They were not the students’ work at all. A few students had taken text directly from the source.”

Meyette said that the punishment for these students varied because of the difference in the layers of plagiarism.

“They didn’t put quotation marks around the passage and sometimes it was a whole paragraph,” Meyette said. “There was no indication that it was a direct quote. Then there were some issues with citing sources properly and works cited done properly.”

Another English teacher, Rebecca Heard, also had a similar issue in her class’ journal entries.

After these incidents, both teachers decided that it was only right to teach their students about plagiarism. Heard had her students write an essay, while Meyette took a different approach.

Senior Jack Goodwin, a student who was in Heard’s class, was accused of violating the Prohibited Student Conduct. Goodwin received a zero on the journal entries because Heard believed he had taken the entire summary off of Spark Notes. After further investigation, Heard decided to change his grade based on the fact that his journals were not verbatim.

Despite apparent controversy over the validity of plagiarism accusations, it is clear that administrators and teachers are taking the issue very seriously.  With the institution of the new policy, they hope to make the consequences of academic misconduct clear.