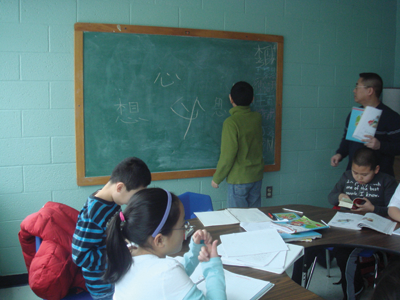 Approximately one in five people in the world speak some form of Chinese. That means 1,379,773,573 people in the world have a Chinese dialect as their first language. Although Mandarin Chinese is the most common, there are nine other major dialects of the Chinese language. Mandarin Chinese is one of six official languages of the United Nations. Four hundred and eighty three out of the Fortune 500 companies operate in China.

With the explosion of Chinese making its way into American society, we should ask ourselves, why isn’t the education system doing more to expose students to the Chinese language? Learning this language will only allow students to benefit. MPS currently offers an online course that gives students a basic knowledge of Mandarin. The course is run through Michigan Virtual School where students that are interested can get the opportunity to take the class.

With local companies like Dow Corning and Dow Chemical that have expanded in China, many DHS students found themselves relocated to China for stints of time. While there, they were widely exposed to the language. Sophomore Ada Wong is involved in speaking Chinese because of her knowledge of two different dialects. Wong is from Hong Kong, which is south of China where they speak Cantonese.

“I grew up with Mandarin and I went to Chinese school but I speak Cantonese at home and little Mandarin at Asian parties,” Wong said. Unfortunately, Wong didn’t get the experience to be able to speak and learn the native language in the actual country.
Sophomore Alex Hus lived in Shanghai, China for two years, where he took a required Chinese class as part of the school’s curriculum. After moving to Midland he continued his education with the online class offered at DHS.

“It was easier in China because it was an actual class. It’s more difficult to learn a language on a computer,” Hus said. The exposure Hus has had with Chinese will be something that he will be able to use in the future.

Likewise, junior Brooks Royster encountered an experience similar to Hus. Royster was first exposed to the Chinese language from fellow junior Daniel Tzou’s mom. Royster had a two year learning experience in Shanghai as well, as with the online course at DHS.
“At first it’s really overwhelming. It’s really just a concept of memorization. As a beginner, you learn as much as you can and you feel your way into the language,” Royster said. In the future, Royster is looking forward to being able to use his knowledge of Chinese to pursue his career in international business.

The amount of American business that has gone overseas and the amount transferring is on the rise. China’s GDP has gone from $1.932 trillion in 2004 to $4.985 trillion in 2009 according to the World Bank. This shows the increased speed at which China’s economy is growing and expanding elsewhere throughout the world. The only way the U.S. can stay competitive with China is to expand business outside the U.S. and engage with trade all over. This only shows a more prevalent need to teach Chinese to America’s younger generation so that by the time they are older they will be able to communicate with people other than English speakers. In the future, being able to speak languages other than English will certainly benefit those in the career aspect. Certain jobs require these skills and obtaining these skills will definitely get anybody ahead in the future.

With the ability in MPS to take Spanish, French and German, it would only make sense for Chinese to be offered. Many public and private schools in the U.S. are beginning to offer Chinese classes and for MPS to stay among the top school districts, they should follow suit. It would make sense to offer Chinese as a main stream course instead of an online class. Offering Chinese would only strengthen the MPS curriculum and make it more desirable for parents to send their students. Also, with both Dow Chemical and Dow Corning expanding more and more in China, the possibility of relocating families is higher than before. Because of this, a basic knowledge of Chinese wouldn’t hurt and would actually benefit the students that have the potential to be relocated with their families.

As of now, many of those interested in learning Chinese have had to go elsewhere to receive the knowledge besides MPS. Every Sunday at First Baptist Church in Midland, there is a Chinese school where members of all ages can take part in learning Chinese. The basic knowledge that is taught to students could be enough for them to gain interest and want to take it as a mainstream class in school. With such a strong interest in the community, it would only make sense for MPS to appease the interest of the community in Midland and add a Chinese class.

If it’s taught to students at a young age, it will only come easier as they progress through school. Overall, learning Chinese has no disadvantages, it only allows more opportunities. For the U.S. to stay a top superpower, its citizens will need to diversify their resume and adding Chinese will be a good addition for all to have. School districts like MPS would find it smart to add a main stream Chinese class to their curriculum, which would attract students from all over.