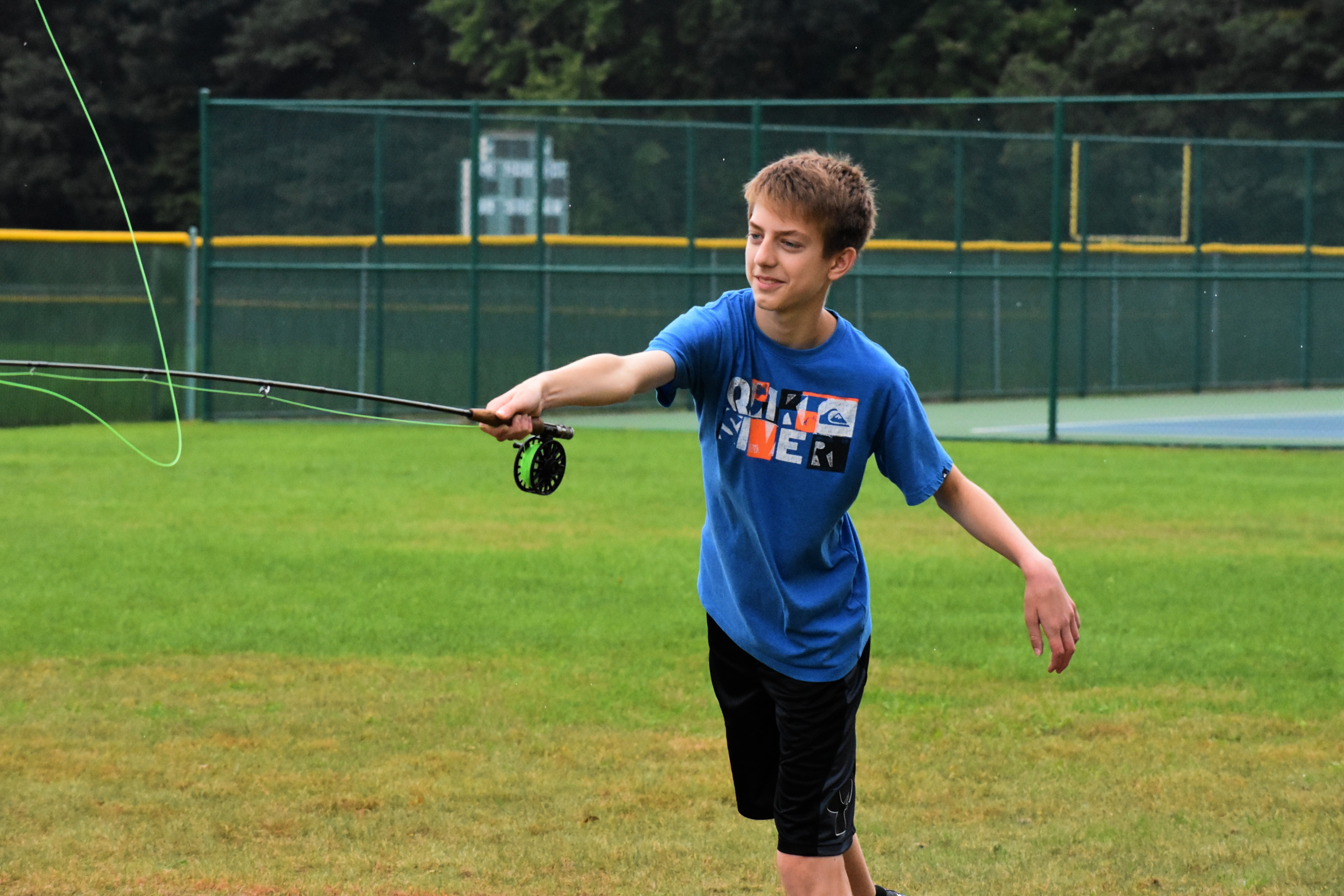 Brent Chambers’ freshman English classes learned how to fly fish on the practice football fields today with the help of volunteers Matt Manceau, Sarah Topp, and Victoria Hankens. The idea behind the lessons was to teach the freshmen about the beloved pastime of an author they are currently studying; Ernest Hemingway.

“I think it’s helping them learn about the romance that Ernest Hemingway found, because he did something he had a passion for and I think that one of these kids might have the same passion as he did and never had the chance to try it,” Manceau said.

Instead of casting the lure out once and reeling the line back in as one would do while fishing normally, fly fishing involves casting a line back and forth with a motion of the arm while letting a bit of line out at a time while swinging. At the end of the line is a small lure called a fly that mimics a real insect, drawing the fish in.

“I really like the rivers and lakes that I get to go see, it’s just really peaceful a lot of times the lakes are very calm, and it’s so cool to actually see the fish jump out of the water and grab your fly,” Topp said.

“I’ve taught about 50 people how to flycast this year, and some people will send me a photo of the fish they catch the very next day, or later in the year,” Topp said. “Hopefully some of these kids will utilize this in their own time.”

While some students enjoyed learning how to fly fish, others were just grateful for the chance to get some hands on exposure to the classroom material.

“We are doing this to help learn about Ernest Hemingway and how he would go fishing in Northern Michigan,” freshman Joe Craig said. “I think it’s pretty cool because we get some hands on experience and it isn’t just sitting in a classroom listening.”

Hemingway was an avid outdoorsman who enjoyed fly fishing himself. His first stories were often about his favorite sport. Several of the characters in his books are also fond of the pastime.

“Tomorrow they’re going to read a short story called The Big Two Hearted River, and the character Nick Adams will be fly fishing, and although the story is about something more complicated than fly fishing, I wanted the kids to see and try what Nick was doing in his story,” Chambers said.

While fly fishing can be hard to master, once one learns how to cast the fly, it may get easier. It can take a lot of patience to learn, but Manceau, Topps, Hankens, and Chambers all agree that it is more than worth it.

“Anybody can do this, it’s affordable, and we have one of the best fly fishing shops in the country here on main street called Little Forks Outfitters, and the folks there would be happy to help young people get into this hobby,” Chambers said.

Chambers plans on making this outdoor fly fishing lesson an annual occurrence for his freshman classes when learning about Ernest Hemingway.

Baczewski stars in “A Christmas Story: The Musical”