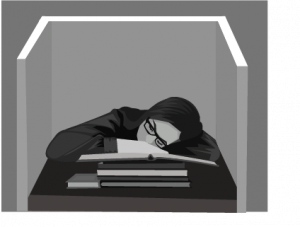 Imagine a student is in an English class and they disrupt the teacher several times, what happens to them? One could assume that they would be suspended, but actually, that is not entirely true. Depending on the severity, a number of things could happen if someone is disrupting a class after they have been warned they could get a closed class where they go into the office and they do their work for the day.

“Closed classes are something like defiance to the teacher or something they’ve been warned a couple times,” assistant principal Julie Villano said. “And out of school suspension is more major maybe they hit someone or had illegal things in school.”

Out of school suspensions are reserved mainly for large offenses, and out of the 1,200 students at DHS only 61 have been suspended.

“I think that there are certain things where an out of school suspension is warranted where we had to get the student out of the building but if we had the manpower I think in-school suspension would be a much more powerful tool to use,” Villano said.

“I think the student would do more work if they were here, the problem is that we do not have the manpower to have them stay here,” Villano said. “Probably statistics show out of school suspension isn’t as effective as in-school suspension, but we try our best try not to have to suspend kids, but we have to if their offenses are that big. Close lunches are good because with an open campus and it really deters the kids from doing things because they come in here for lunch, so that’s usually my first avenue to go is to have close lunch and then if it gets worse we have to have a close class and they can come and sit in here, but the major offenses would be out of school suspension.”

There are some things that the administrators have to take into consideration when choosing the consequence for students that have acted up.

“I usually get the story secondhand,” Villano said. “It’s how much the story I get and maybe someone saw it where I didn’t get the full story in an opinion it might be a pretty good list of things that kids should get out of school suspension for.”

Some students think that out of school suspension is a reward.

“I’m hoping that it’s not a reward,” Villano said, “I’m hoping the parents have consequences at home I think most of them do because they’re usually pretty upset when they have to go home. I am sure there are a few where if the parents aren’t home and can’t guide what they do. Then maybe it is a reward, but I think that most people wouldn’t see it as a reward.”