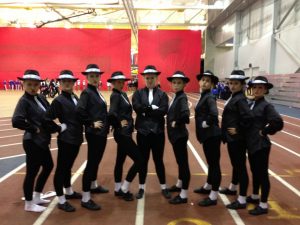 Most people are unaware of how much time the DHS Pom teams put into their preparation for competitions but here is some insight. Over this past Sunday, Nov. 3, the Varsity team competed in the High Kick Competition located at Saginaw Valley State University, put on by MidAmerican PomPon. The team ended up placing sixth in their medium varsity division out of nine teams. The team was elated with their placement considering two years ago they had received eighth place out of nine teams.

The team began learning their routine in pieces the first week of school.

Pom had completed learning their routine as of mid-October and since the last football game they performed at, Midland v. Dow, was around that time, it gave them a lot more practice time to focus on only high kick. Practices were held for two hours, Monday through Thursday, with a three hour practice on Saturdays. Aside from that time, all members of the team are required to have a half hour individual practice for the captains and coach to watch and critique them. That is a minimum total of 12 hours of practice time for the last two weeks the team had before their competition to really focus. Prior to that, practice time was mixed between focusing on high kick and football routines and ran for two hours, four days a week. In total, about two months went into the preparation for the competition.

For those who are unaware with what high kick is, it is a competition unlike regular pom. The performance given must be at least two minutes, with a minimum of 40 kicks which must be at waist level or higher and must have a theme. This year, the DHS Pom team chose  the theme The Roaring Twenties and had half of the team portray men and the other half perform as flapper girls. Their routine had 43 kicks total and ran for just over two minutes. Their music was a combination of songs from the 1920s as well as music from the Great Gatsby soundtrack.

“Our theme this year was like never before and made it super easy to genuinely have a good time during the performance even though we were exhausted from kicking,” junior MaryClaire Bassett said.