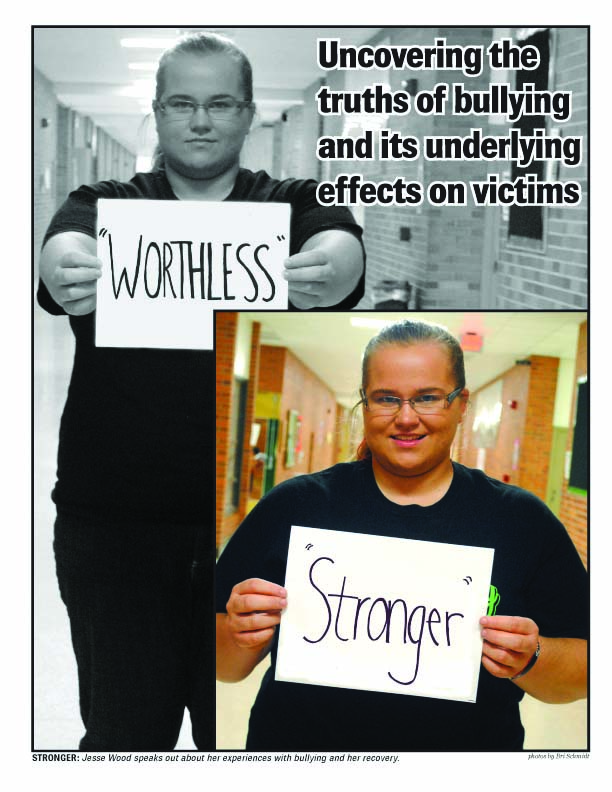 Editor’s note: The following story contains graphic content that may not be suitable for some readers, but the editors felt it was essential to the story in order to depict the reality of the events. Please be advised before reading.

In the United States, 160,000 high school students miss school every day for fear of being bullied according to StopBullying.gov. Whether it is face to face or on social networking sites, bullying happens everywhere, including DHS.

On Feb. 22, Jesse Wood, former MPS student, spoke at Central Middle School about bullying during the school’s anti-bullying week. Wood, who began being bullied in 7th grade, while attending CMS, spoke out about her experiences, her depression, and cutting herself.

Wood told her story to students to encourage them against bullying and to speak out if they are being bullied or know someone who is. CMS teacher Kathy Romain, who had Wood as a seventh grader, invited Wood to speak at the school with intentions that the speech would encourage others to take lessons from her story. Romain herself was a friend and confidante to Wood throughout her struggle with bullying.

“In the hallways the kids would whisper swear words to me as I passed by and would call me names, telling me how much better their lives would be if I would just die,” Wood said. “At my locker they hung a sign paying me to move away and eventually upped the ante, offering me $5 to kill myself. Each time they said something they hated about me or every time they threw my stuff in the trash it was as if they were taking a piece of me and destroying it.”

Although Wood visited teachers and counselors, she never spoke out about her bullying until now. The bullying worsened, and Wood started cutting herself, which progressively got worse, to the point that she was using tacks on her hips and thighs. No one else could see them, so the cutting went unnoticed.

“I thought that the self-injury would fix my problems or at least make me feel better, and at first it did,” Wood said. “Cutting for me became the tears I couldn’t cry.”

Although Wood was unwilling to talk specifics about her bullying, she looked for guidance and protection from teachers like Romain.

“I knew something was wrong, but she wouldn’t talk to me or tell me what was wrong,” Romain said in an email interview. “She would only chew on the sleeve of her sweatshirt and grunt. Later she realized that I loved her no matter what.”

After a span of silence, she confided in her sister’s friend and word of the cutting and bullying got back to Wood’s mother, who decided Wood should switch to Jefferson Middle School.

Upon switching schools at the beginning of eighth grade, life for Wood seemed to improve at first. However, a new “friend” caused even more tension. The friendship continued to evolve into an obsessive relationship.

“She told me everything about her life and I told her everything about mine,” Wood said. “The longer we stayed friends the more signs that an unhealthy abusive friendship was occurring. She wouldn’t let me hang out with anyone else and if I did she would cut herself, threaten suicide, and then blame it on me.”

Wood found herself the victim of bullying once more. Transitioning into high school, the problems worsened.

“I didn’t trust anyone and was terrified of people; sure that anyone who came into my life came on purpose just to hurt me,” Wood said. “I wouldn’t talk to anyone no matter what the circumstances. I hated anyone who even tried to get close because pushing them away was easier than watching them push me away.”

Unfortunately, the JMS “friend” met up with the original attackers from CMS, and the bullying intensified.

“They would follow me around at football games, doing anything they could to get me to cry and to make my life miserable,” Wood said. “I stopped going to the football games or any social organization just to avoid them, which only kept me isolated from the rest of the world. When they couldn’t get in contact with me in person they would call me or text me. Eventually I stopped answering their phone calls hoping it would stop them from the bullying. Instead they called and texted from unfamiliar numbers. I wasn’t safe at school and I wasn’t safe at home. They inadvertently were controlling my life.”

As Wood fell into a severe depression, she began bringing razors to school, cutting multiple times throughout the day. The school resource officer, Lieutenant Berchert, noticed Wood’s cutting and reported it. She began to meet with former DHS counselor Kurt Faust twice a week. Soon, Wood’s mother was informed and Wood was prescribed anti-depressants.
Romain worked with Faust to find out more about the cutting and its severity. Oftentimes, she would call Wood and although Wood wouldn’t talk on the other end, Romain knew she was listening. Romain also invited her to sporting events, saying it gave her the chance to give her a hug and see how she was coping.

Despite attempts by Romain and Faust, the anti-depressants began to provide an additional method of harm for Wood: overdosing and becoming void of any feeling. Soon after, in a fateful day in math class in eleventh grade, Wood’s life changed drastically.

“[I] took the razor blade to my arms cutting them up and down 120 times on each arm,” Wood said. “I don’t remember much of it that day. It was like I was trapped inside a different world, where I knew that I was cutting but I just couldn’t stop. Before I had even reached the classroom, blood was seeping through my shirt. I knew then that I had hit rock bottom.”

This time, the cutting did not go unnoticed. Wood ended up in the hospital, and Faust, along with hospital psychologists and Wood’s mom, decided to send Wood to receive extra help and care. In suicidal and critical condition, Wood packed her bags and headed for a residential treatment program in Traverse City called Abba’s House. There, she was treated for one year before she graduated.

“It [was] two years on March 15th since the last time I cut myself,” Woods said. “Every day I have to make a conscious effort to stay strong and to remember who the real me is.”

Romain believes that Wood’s speech left a lasting impression on students at CMS.

“I reference her experience when I hear about bullying at Central,” Romain said. “Many kids come to me now and tell me what is going on.”

Wood now is attending Saginaw Valley State University and leads a youth group in which she helps others in pain.

“If you were to ask me if I thought Jesse would be where she is today a few years ago, I would have said no,” Romain said. “She has made amazing gains and has helped several kids who are crying out for help.”
Wood’s story does not stand alone. DHS junior Kelly Fin knows what it is like to be bullied relentlessly.

“Bullying is probably the worst thing you can do to someone,” Fin said. “That stupid phrase about sticks and stones is completely untrue; words can hurt you forever. You can go through hell when people say bad things about you. The scars you have on the inside can last a lifetime; I’m never going to be the same. It’s the way it is.”

Fin was the victim during her time at a school district in southern Michigan.

“First, I was just teased or mocked,” Fin said. “It really hurt because every step I took or word I said was made fun of. People found it really fun or cool to cause me pain or ridicule me, to isolate me. I was called weird, ugly, and uncool. It only ended when I moved to Midland in the middle of eighth grade.”

Like Wood, Fin felt alone and took her depression to the extremes when she attempted suicide at 8-years-old.

“It made me feel heartbroken, that my heart was breaking all the time and I felt absolutely hopeless from the very beginning,” Fin said. “My self-esteem and self-image from the beginning were so low; I hated myself and everything I was. I can say that it was the worst pain I’ve ever experienced.”

Although bullying occurs often in any school district, Fin believes that the bullying was worse at her old school.

“When I first moved here, I was surprised that people were so nice to me,” Fin said. “I was happy, but it still surprised me. I wasn’t used to it.”

Fin is happier now and feels as though she is in a much better place than she was before.

“Looking back on it, it only made me stronger and more mature because I am now strong enough to fight against it,” Fin said. “Thankfully, I am better now.”

If a student is being bullied at DHS, they have multiple options. The student can go to counselors where the situation would be evaluated. If the situation repeats itself, even after being talked to by a counselor, then an administrator is required to get involved as well.

“A lot of the bullying tends to be personal reasons, whether a relationship thing, jealously or anger,” DHS counselor Douglas Bradford said. Bradford deals with a couple of bullying cases a month, but a lot of the situations are dealt with immediately by the assistant principals.

DHS assistant principal Dirk DeBoer agrees that the bullying at DHS is generally of a different kind than most high schools.

“It’s not the type of school where you walk through the halls and see this stuff happening all the time,” DeBoer said. “But it’s there. We don’t have a lot of incidences where people are going around punching each other in the face.”

The assistant principals at DHS deal with bullying on an average of about once a week. Due to bullying being against the law, each incident has to be documented and recorded to report to the state. However, administrators can only see so much. With technology and social media, students are at risk at school, at home or anywhere with cell reception.

“We have a zero tolerance policy here,” DeBoer said. “The state can write as many laws as they want to and Dow can enforce it as best they can but unless Dow High’s population says we will not tolerate this, we’ll only be hitting the top of the iceberg.”

One thought on “Words did hurt me”