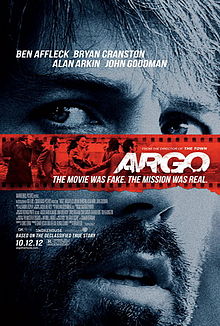 Not many Americans understand the relationship between Middle Eastern countries, such as Iraq and Iran, and the United States. Most people look at the hostage crisis of 1979 as the beginning of the tension between the East and the West. Ben Affleck’s “Argo” is a film centered on that very crisis. It tells the story of Tony Mendez, a CIA agent who went to Iran under the pretense of making a movie, when he was really going to save six Americans hiding out at the Canadian embassy.

With tasteful humor and great directoral touches,  “Argo” certainly earned the Academy Award for Best Picture. The movie begins with a much-needed explanation of why Iranians kidnapped the representatives from the U.S. embassy in the first place. The next scene is a little more familiar and significantly more disturbing: a rioting crowd of angry Iranians yelling and burning an American flag. Suddenly, the audience has a glimmer of understanding for these people and what they’ve suffered. Affleck does an excellent job of balancing the American and the Iranian sides throughout the movie, particularly by showing real clips of protests in both countries. The only differences are the skin colors of the people and the language they’re yelling in.

Affleck also manages to recreate 1980 superbly in “Argo”. Every character has a cigarette in the corner of their mouth, wire-rim glasses, and thick sideburns to match their thick mustaches. Even the opening sequence contains Warner Brothers’ old logo from the era. The attention to detail is phenomenal. Affleck manages to recreate characters, settings and scenes down to every last trifle.

Like any movie characterizing true events, “Argo” dramatizes the danger the six hostages were in. They almost start a riot at the bazaar; officials stop them at the departure gate and the police even chase after their plane while it’s speeding down the runway. Some historians have criticized this dramatization, but it does make for good cinema. As the crowd storms the embassy, you feel the fear of the diplomats inside. When the six hostages get stopped at the airport, the suspense tightens your throat.

While this movie does cover a very serious topic, it has a lot of great humor and certainly earns its R-rating quickly. A character drops the f-bomb almost every scene, including a running joke between the agents involved in rescuing the hostages. Alan Arkin and John Goodman add most of the humor as their characters, Lester Siegel and John Chambers respectively. These two men are movie industry moguls who are working with Mendez to get this fake movie, “Argo”, off the ground. These two actors work perfectly with each other, bouncing sarcastic remarks back and forth continuously.

Some movies like to hit you over the head with a theme or message, but “Argo” tries to be a little subtler. While the six hostages are hiding out in the Canadian embassy, the Iranian housekeeper, Sahar, realizes who they are. However, when a group of men show up with guns, she goes along with the story and says the hostages are a film crew. When the hostages, Tony Mendez and the Canadian ambassador finally return to North America, they celebrate with a bottle of champagne. But Sahar? She’s left trying to sneak into Iraq, a wanted fugitive with nothing to her name. The contrast between these two fates is sharp and adds a bitter taste to the final scenes of the film. Its these subtle touches combined with an accurate recreation of the era and startling humor that let “Argo” take home Best Picture.