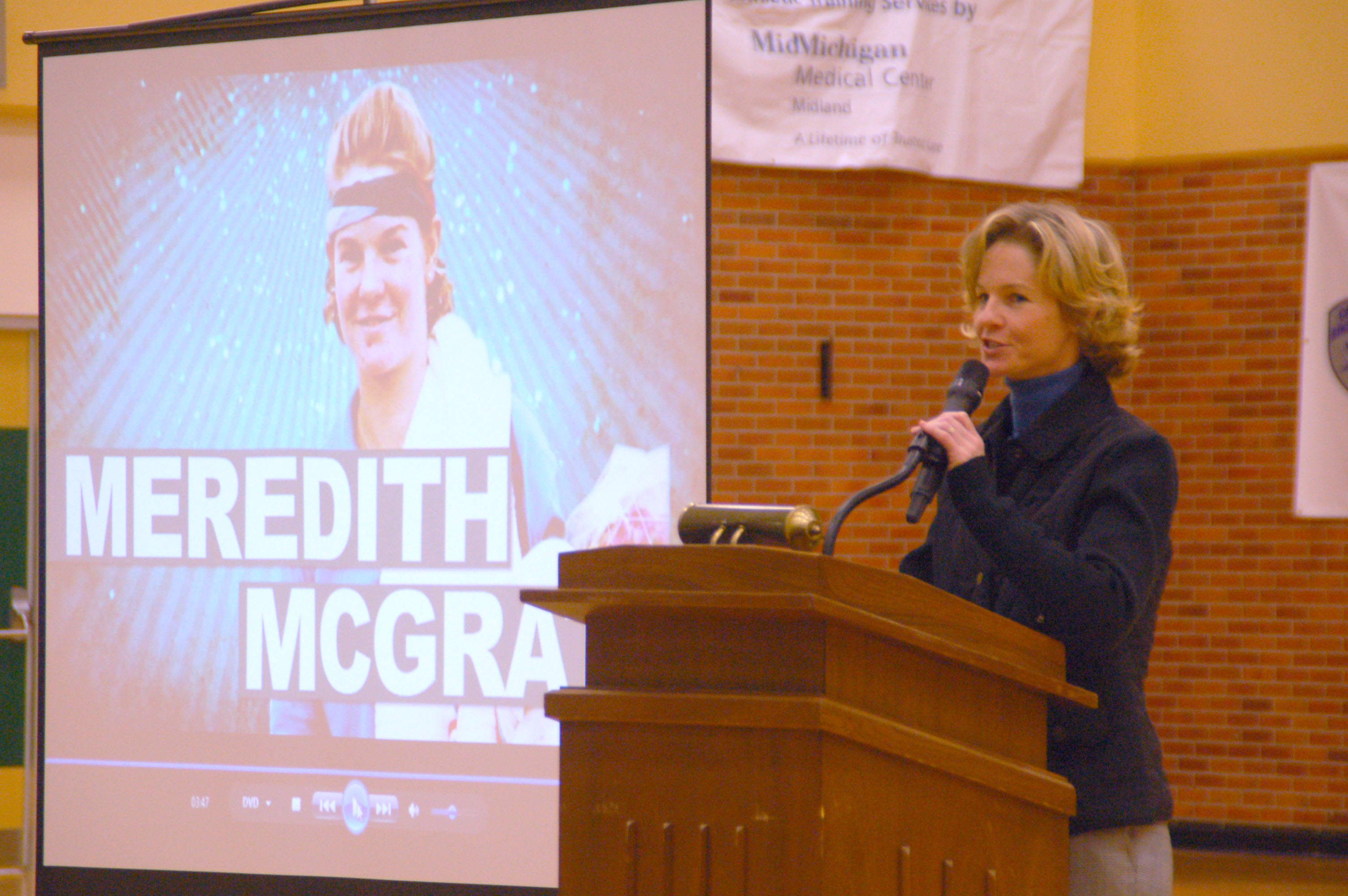 On Monday, Feb. 4, former professional tennis player and spokesperson for the Dow Corning Tennis Classic, Meredith McGrath, visited DHS to speak with aspiring student athletes. McGrath was in town for the tournament which was held from Feb. 2 to Feb 10. She spoke at many events and conferences over the week-long competition.

McGrath grew up in Midland, attended DHS, and competed on the school’s tennis team before graduating and moving on to Stanford University. She attended Stanford for one year and then moved on to become a professional player.

“It’s been about 20 years since I’ve been back in this gym,” McGrath said upon entering the school. “Being back brings so many good memories: pep rallies, basketball games, and so many amazing times from right here.”

McGrath came to speak with DHS’s athletes about hard work, risks, following dreams and making good choices. She spoke from personal experiences as well as sharing success stories of others such as Herbert Henry Dow.

As a junior and senior in high school, McGrath was the number one junior player in the entire world, facing dreams of advancing further and winning Wimbledon.

“For a tennis player, Wimbledon is the tournament of the year,” McGrath said.  “It holds the most tradition, and most tennis players view it as the one to win.”

On the path to fulfill her goal, McGrath was injured, weeks before Wimbledon. She decided to push through, a decision that she admitted likely caused the end of her career. She made it all the way to the semi-finals of Wimbledon, before her injury prevented her to play at her best.

”Looking back, the smart decision would have been to get an airplane, go home, get an MRI, see a doctor and take a couple months off,” McGrath said. “But I didn’t. I thought, I’m here at Wimbledon and this is my dream. I was playing unbelievably well so I thought I would push ahead.”

McGrath highlighted that the moral of her story was that she took a risk to get what she wanted. Although it was a decision that risked the remainder of her career, McGrath admitted she would never take it back.

As well as taking risks, McGrath shared stories of bad risks and decisions as well.  In high school, she was picked up by the cops for underage drinking. This consequence caused her to think how this would affect her tennis career and future.

“My immediate concern was ‘Oh, God, my parents are going to kill me’,” McGrath said. “That didn’t happen, however, my next concern was what’s this going to do to my high school eligibility, am I going to be able to play on the tennis team? Lastly, my concern was, is this going to affect my college career?”

Another point that McGrath emphasized was the importance of academics in her career. After only attending Stanford for a year, she promised herself she would return and complete her degree.

“My parents made it very clear to me, school came first, tennis came right afterwards,” McGrath said. “My first $150,000 in earnings, I marked that as my return to school fund, put it in an account and didn’t touch it.”

After finishing her tennis career, McGrath returned to Stanford, finished her degree and now works as a business owner and head of many corporations.

Students who attended the speech were able to speak to and talk with the player.

“It was cool to know that McGrath was a just a normal person like the rest of us kids in Midland and she was able to achieve something so incredible,” junior Julie Cross said.