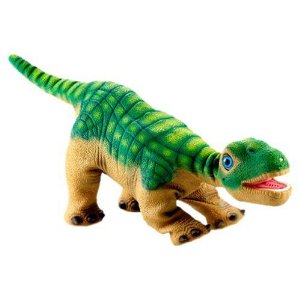 “We hope to be able to add to its programming during our robotics unit in Computer Programming 2, and in our Programming Club meetings,” math teacher Suzanne Ostahowski said.

PLEO, much like a real animal, has four stages of life that he goes through. PLEO is in the newborn stage when he is opened and has to hatch. After two days of proper feeding and care he will begin the toddler stage. The toddler stage is a time to teach PLEO his name and how to stand and walk. Once PLEO is capable of walking on his own, he will then enter the teenage stage. Verbal commands then need to be programmed so PLEO can transition into the final mature stage.

“Right now he is in the juvenile stage,” Ostahowski said. “He can stand, and moves a little but still hasn’t learned to walk. He is getting more and more vocal and responsive to people.”

The dinosaur has camera-based vision, microphones to hear and touch sensors that give him a life-like appearance. He can perform basic functions like walking around a room and moving his head. PLEO can also perform more complicated tasks such as falling asleep, getting sick and displaying basic emotions such as anger and happiness. In order for all of these functions to be able to happen, PLEO has eight tiny computers inside of him that let him process the signals coming from all of the sensors on him and process that data.

“Each PLEO learns from its experiences and environment through a sophisticated artificial intelligence and develops an individual personality,” Ostahowski said.

“PLEO’s nice,” Pirie said. “He’s become an integral part of the community in our classroom.”

Sara Schluckebier contributed to this article.