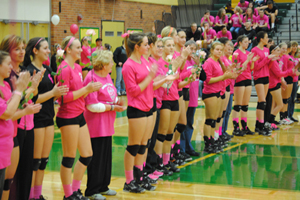 The DHS gym was filled to watch the varsity volleyball team sweep Bay City Central 25-8, 25-7, 25-18 on Oct. 16 for Volley 4 a Cure night in dominating fashion.  Hitters Erin O’Neil (junior), Alyssa Stone (sophomore) and Helena Atton (sophomore) each had excellent games for the Chargers.

However, the game was only part of what the volleyball team did throughout this week.  Decorating the front of the school with Volley 4 a Cure signs, painting the spirit rock pink and silver, along with raising money, selling baked goods, and T-Shirts capped off the volleyball teams busy week.  In total, the team raised over $4,400 toward breast cancer research.

“It was really special because it was Volley 4 a Cure night and it was on our home floor and we totally shut them out,” Illundain said, “We also had a lot of fans come out which was really good.”

The dominating performance on the floor, along with the Volley 4 a Cure happenings made it a great week for DHS volleyball.  The team competes in the Beast of the East tournament this weekend.