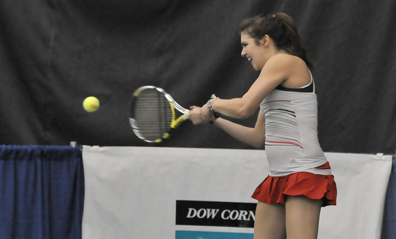 Senior Daniella Patton and junior Kelli Close may be among the top tennis players in the state, but through the Dow Corning Tennis Classic, they’ve been able to do something most other high school players haven’t: compete with some of the top players in the world.

Every year, the Dow Corning Tennis Classic is held at the Midland Community Tennis Center for a week in February. The tournament is part of the Women’s Pro tour and has featured players who have competed in some of the highest ranked tournaments in the world, including Maria Sharapova. For the past two years, Patton and Close have had the opportunity to compete with professionals from all around the globe due to a wild card draw. The tournament features this draw for local athletes to participate in the tournament as doubles.

Last year, Patton and Close lost first round with the scores of 6-0 and 6-1 to players ranked top 200 in the world. Close said that their play was the first she’d known about local players in the tournament.

This year, they not only had one year of experience in the tournament behind them, they also received an easier draw for first round. Their competition was only top 700 in the world as oppose to top 200 and Patton and Close put up a bigger fight falling out with the scores of 6-0 and 6-2.

Close said that overall she was pleased with their performance.

“The level of competition that Daniella and I usually play with isn’t necessarily that high, so competing against the professionals was different,” Close said. “They hit a lot harder which we’re not used to but we were able to [rise to the competition] so it was good.”

On top of playing doubles for the second year in a row, Patton was given the opportunity to also play singles in the tournament.

“They have a qualifying tournament and depending how you do in it then they allow you to go play in the national tournament,” Patton said. “I lost in the qualifying tournament but so many people withdrew last minute because of the snow and flying in, that there were opening spots and they let me play in it.”

Patton, who is headed to Xavier to play tennis on a partial athletic, as well as academic scholarship next year, competed with the professionals, but lost in the first round with the scores of 7-6, 7-4 in the tie break 3-6 and 1-6. Despite losing, Patton said that she was happy to have been given the chance to play in the tournament.

“I’m a lot less experienced,” Patton said.  “They’ve been playing a lot more and it’s their life, so I just try to go in and just try to have fun and try to do the best I can and just take my chance and have the opportunity to play against these great players.”

Close agreed that the tournament is a great opportunity for them to play against the professionals. She said that they have been going to the tournament since they were little and working as ball girls before playing in it for the first time last year.

“It’s a very good experience to see the highest level players and to see what you aspire to be someday so it’s really awesome,” Close said.

Close added that she hopes to build off this tournament and continue to develop as a tennis player with the possibility of returning.

“My goals are to play college tennis and then maybe find myself back in this tournament after I get older, stronger and become a better player,” Close said. “I get sent stuff, but I haven’t seriously started looking at colleges yet. I have visited a few colleges but that’s it, right now I’m interested in Georgia Southern.”

Patton, who on the other hand has her college plans set, is looking forward to playing at Xavier.

“I’ve wanted to play college tennis forever. I started when I was four so it’s been a big deal to me,” Patton said. “I’ve always wanted to play Division-1 but never really knew if I would be good enough.”

Like Close, Patton said that she would enjoy the possibility of returning to the tournament after having years of college experience behind her.

“I would love to do that,” Patton said.  “I love the sport but my focus in college is on academics, so I’ll just have to see where it takes me in the future.”