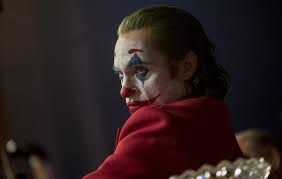 While the basic concept of “Joker” is simple, being an origin story for Batman’s greatest nemesis, the film is not as cut and dry as viewers might believe. Delving deep into the mind of the Joker, alternatively known as Arthur Fleck in the film, the film exemplifies the toll that mental illness can have on ordinary people, and shows that dealing with mental illness is difficult. Senior Ben Brueck has viewed “Joker” and contemplated both the story presented in the movie, and the reason for why Phillips wanted to tell the Joker’s story the way he did.

“It seems fitting for what I know about the character,” Brueck said. “It seems like an accurate depiction of a story that would create the Joker.”

Within the confines of the restless Gotham City, Arthur Fleck commits many violent atrocities on his journey to becoming the murderous madman that is the Joker, and Joaquin Phoenix, the actor of Arthur Fleck, portrays the beautiful yet disturbing descension into madness perfectly, making the audience feel uncomfortable and apprehensive during the film. Junior Rihana Syed describes how the film made her feel while viewing it.

“I feel like for some people it would be kind of intense, but I feel like it actually got the point across and it was good for the details of it,” Syed said.

Upon the release of Joker, many credible publications and media review outlets such as Time magazine have criticized the movie, speaking about how the Joker in the film could be portrayed as a hero to incels, that the movie was intended to create political statements, etc. Phillips and Phoenix have reportedly spoken on these issues many times, saying that the film was not intended to create a political statement and glorify violence, but simply to tell a very real story about a made-up character. Senior Enrico Setiawan believes Phillips and Phoenix when they say that the did not want to cause any sort of trouble or disturbance when creating “Joker”.

While some major media outlets portray “Joker” as a movie full of hidden agendas, movie and comic book fans all over are describing it as an industry-changing film for the better, delving into more serious yet real-world themes. Senior Will Young enjoyed the movie and wishes for others to see it as well.

“I think everyone should see this movie because it’s really entertaining, and it deals with an intriguing subject matter so I just want everyone to see it,” Young said.

Phillips’ 2019 film “Joker” integrates fantastic acting, important real life themes, interesting ways of story-telling, and adds more to the path of exploring a comic icon. “Joker” receives a finishing rating of 9/10 due to its fantastic pieces that all come together to make more than the sum of its parts, making this movie no joke.

[The story] seems fitting for what I know about the character, it seems like an accurate depiction of a story that would create a character like the Joker.

I knew it was going to be great because these villain movies are always such a hit, and despite seeing [just] a trailer you can see the cinematography, it’s unique, it’s cool. The cast is really good, and I just felt like it was going to be a good movie.