Dow High students have been parking in the wrong spots since the beginning of the 2019-2020 school year.

“At the beginning of the school year, we didn’t have everything numbered, so parking spots was kinda like a free for all,” principle Ted Davis said.

During the first couple days of school, students would park anywhere they could, since parking spots were unconfirmed. This created chaos for both students and administration.

“There was also some misnumbering once we got the spots out there,” Davis said. “So what was on our diagram of what the lot was supposed to look like, came up about four to six spots short that actually got put into the band field, instead of the end we asked.”

In addition, it was discovered that purchasing parking spots has been especially popular this year, and more spots were sold in the past 3 weeks than all of last year combined.

After some time, the parking spot situation was slowly but surely resolving itself.

“At this point I think everybody has their spots,” Davis said. “There might be one or two a day now that aren’t parking where they’re supposed to be. So I think most of it has been cleared up.” 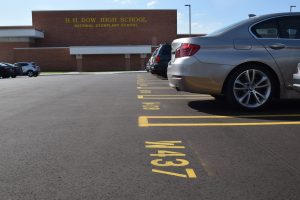 After the long summer of renovation, the Dow High parking lot is finally ready for students to park. All the numbers were painted and assigned to each student driver.