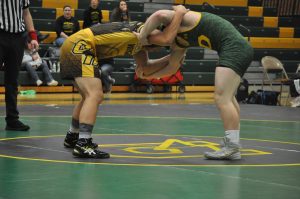 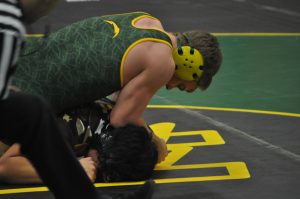 As the week of first semester exams comes to a close and the wrestling mats get rolled out, the DHS varsity wrestling team prepares for a match against Ogemaw Heights on Jan. 25.

Starting off with a victory for the Chargers and adding six points to the board would be senior JJ Sweet with a quick pin on Ogemaw’s Sean Iwinski in the first match of the night.

Tacking on more points to the board, sophomore Kaleb Studebaker had a quick pin in the first period on female wrestler Valerie LaFond from Ogemaw Heights.

A former state championship contender, junior Brennan Doyle fought through three rounds, staying on top of his opponent Tyler Short for most of the time. Doyle was close to many pins but could never complete shoulder contact long enough for the referee to make the call. At the buzzer, Doyle came up on top with the victory for the Chargers.

“I was expecting to get a ranked kid, but he hurt his hand and couldn’t wrestle tonight,” Doyle said. “It was disappointing to hear that I wouldn’t be up against him tonight.”

Taking losses for DHS and falling to Ogemaw Heights wrestlers were freshman Xavier St. John, pinned Marshall Donovan, as well as Dane Delong who fell to Zea Cartes in a hard fought match.

Senior Brent Booth, weighing in at 204, didn’t have an opponent in his weight class on the Ogemaw Heights varsity team, so he went home without breaking a sweat.

“I get excited for my wrestling matches,” Booth said. “It’s always disappointing to see that I have no one to go against.”