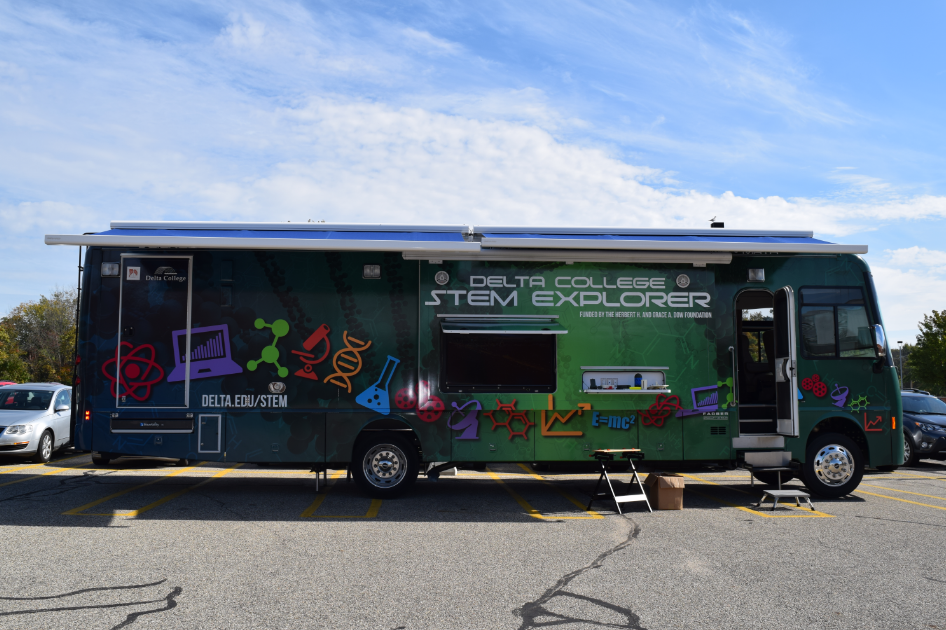 The Delta College Stem Explorer bus was parked at DHS on Tuesday, Oct. 11 to facilitate Mr. MacNamara’s physics class in a month long, STEM based research project. With each visit, students will perform “deep-dives” in which they study the physics behind protective phone cases. The bus was made possible by a grant from the Dow Foundation, allowing Delta to create this mobile science station.

“Tuesday we kicked it all with a project involving cell phones,” physics teacher Thomas MacNamara said. “Really all of the deep dives, either in biology or chemistry or whatever, are supposed to center around the cell phone, and then they try to tie into what’s called the Michigan Standards, the things we’re supposed to teach [students] about science.

The topic of cell phones stems from the physics unit on collisions, and the forces and accelerations involved in a collision.

“We’re trying to design a [model], something that could be thought of as a protective covering for a cell phone, a case,” MacNamara said. “So then what we’re gonna do is make a 3D model of something that’s going to hold their crumple zone, then we’re going to shoot a cell phone in a case at a wall, to see if it will protect it.”

The STEM bus itself is not critical to the project, but acts more as a promotional vehicle for science, technology, engineering and math in the area. The STEM bus will be returning a couple more times this month, and then again in February for Mr. Hoerneman’s physics class.