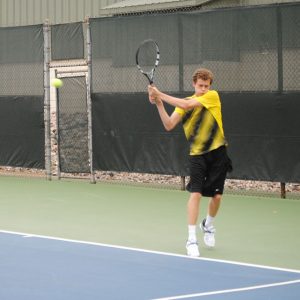 DHS tied with Country Day but took the title with a 5-3 win over them.  They won over Huron 5-3 and defeated MHS 8-0.

Set back by a rain delay early in the day, the boys played late into the day, finishing the quad with the four singles match against MHS.

“The team played pretty well,” sophomore William Kirkman said. “We were pretty confident and we came out strong because we were playing some tough teams.”

“It was pretty nice winning the power quad with the best team in the state,”  Varun said.