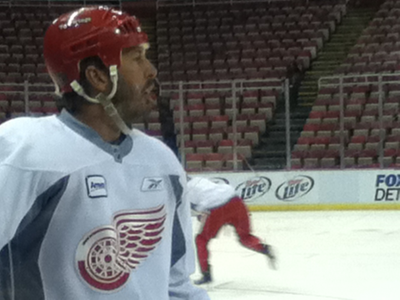 After watching their 4-1 third period lead evaporate and turn into a 4-5 shootout loss to the Coyotes, the Red Wings returned home Tuesday and had their first practice since their long stretch of road games. The team focused on special teams for a majority of the practice.

After having time to digest the loss, Red Wings coach Mike Babcock wasn’t happy with how the team performed during crunch time.

“Heartbreaking is when you do everything right and a better team still beats you,” he said. “When we lost to Phoenix, it wasn’t heartbreaking.”

He also added that although his team is playing well, it’s not at the peak of its performance. He explained how his team still needs work to match the efforts of the championship teams of the past.

Babcock compared the loss to a “minor speed bump” in the Red Wings hopeful road to the Stanley Cup.

“When things go wrong, it’s a momentary doubt,” he said. “It’s all about how you respond to that doubt.”

Unfortunately for Detroit, the “speed bump” will remain for at least a few more days, as the Red Wings fell to the Kings of Los Angeles for the third time this season by a score of 2-1. They host the Edmonton Oilers tomorrow at 7:30 p.m.